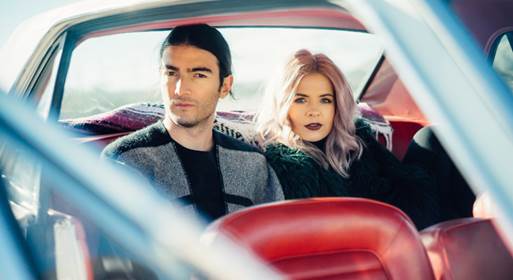 Dani Poppitt and Marshall Gallagher are the duo known as Shallows. Their genre bending music has been critically praised by such outlets as Paste Magazine who said they were “a refreshingly new sound that blurs the line of alternative and electro-pop.” I recently got the chance to talk to the members of Shallow about musical trailblazers, the DIY scene, and more. check it out below.

1. How did Dani Poppitt + Marshall Gallagher meet and decide to form Shallows?

M- We met at my apartment-warming party in LA a few years ago. We were both
looking to work with other songwriters and producers to get our chops up – this was a chance encounter and it just ended up working. Which is rare, we got super lucky.

D- Marshall and I met at a crazy house party in Korea town. We actually didn’t even hang out at the party. It was on the way out that we bumped into each other and decided to add each other on FB.

2. If you had to pick one musical era that inspires Shallows the most what would it be and why?

D- Definitely the 90’s. Marshall might be the most 90’s dude I know. A lot of the music that both of us are inspired by came from that era.

M- I’d say the 90’s. Sonically we’re probably more 80’s lately, but the music Dani and I agree on tends to be 90’s pop and alternative, and that informs our songwriting quite a bit.

3. Why is it so important for Shallows to blend musical genres and erase labels? Does this go beyond music?

M- Haha not really, I just think it’s dumb for an artist these days to stick to one thing, if you have the ability to experiment. I want to start every kind of band ever, but I can’t, so I try to fit as many things I love into this project as I can, at the risk of it sounding contrived or too ridiculous. It’s just for fun really. But we both have enough taste to
recognize if something isn’t working (hopefully), so it doesn’t come out sounding like a million different artists smashed into a box.

D- I think it’s a part of human nature to get bored with what we already know. We have to switch it up and keep music interesting. The direction that music is heading in is beautiful. Pop is no longer pop. We’re seeing what we can get away with. 😉

4. It is stated on Shallows official Facebook page that you “design songs with little regard for fashion.” This is how great artists are born. Who are some of your favorite musical trailblazers?

D- All my songwriter girls who are going for it with their own artist projects. Bonnie McKee, Julia Michaels, Bibi Bourelly.

M- Man… I just saw Crystal Castles for the first time and they’re my new favorite. They don’t really sound like anyone else I can think of, speaking of blending genres. Lately I’ve been hearing the most “trailblazing” stuff out of the hip hop world – Kendrick Lamar,Kanye West and deeper cuts like Death Grips continue to push boundaries in really tasteful, successful ways.

5. How do you feel about being compared to other artists? Especially when you are trying to make your own unique music?

M- I don’t care. Everything is a remix, and I feel like I personally have enough self awareness to know I’m not the next Kurt Cobain, haha. I know we sound like a few other people and I’m not ashamed of it.

D- People always compare things to what they know so they can relate to it. I don’t mind it really when it’s meant to be a compliment.

6. Do you keep up with current music? And if so what artists do you listen to?

M- As much as I can, with the sheer magnitude of all the new music out there. I think my favorite new artist right now is Wolf Alice.

7. What qualities about each other do you admire the most?

M- I like Dani’s hair. Haha. And her willingness to get weird on a track. Her DGAF level is something I envy.

D- Marshall is one of the few people I know that can and will actually finish something and follow through. Also when we get into a writing room it’s pure comedy and my stomach hurts from laughing by the end of the day.

8. You are producers as well as songwriters. You’re very much a DIY band. Do you relate to the DIY culture that exists?

M- Oh we’re not really all that DIY. We have a manager, team and label. But as far as the creation of the music and the initial push, I guess you could say we’re DIY since we wrote, produced, mixed and mastered everything ourselves for the first year or so. I come from a punk background, but I always felt a little distant from the super DIY culture. Like I identify with the work ethic but if someone wants to help us promote a record and tour then I’m all for it. I also spent six years touring with 3OH!3, who do like 95% of everything themselves and I learned a lot from them. Independence is something to aspire to but there’s no shame in a little help getting the music out there.

9. What is one thing you hope your listeners take away from your music?

M – I hope we’re a band people start to follow, as opposed to being a random artist with a random song on their workout playlist.

D- Love and all the feels!