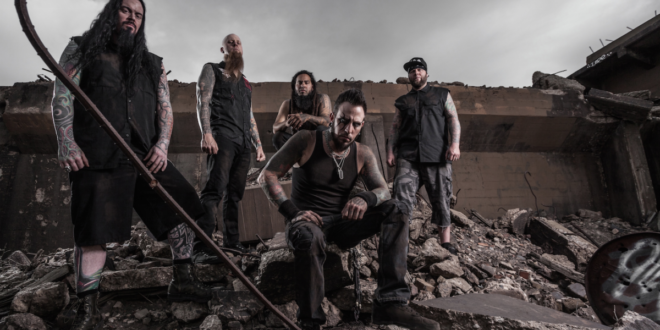 Invidia is thrilled to be joining hardcore-metal band All Hail The Yeti on their “Screaming Black Curse” tour with supporting act Broken Rail. The tour will kick off on May 17th in Los Angeles, CA at the infamous Whisky A Go Go and several more dates will be announced soon. For more information on Invidia and upcoming tour dates, CLICK HERE.

Bassist Matt Snell said: “Invidia is beyond thrilled to hit the road with our friends in the mighty All Hail the Yeti! We’re excited to see our Invidian nation again as we roll through the U.S.! Come out and have a night you wont forget!!!”

The “Screaming Black Curse” tour is sponsored by Schecter Guitar Research and Black Hope Curse Clothing. At each date, fans can enter to win a Schecter guitar! A winner will be selected at the end of the tour, so fans should arrive early at each tour stop to enter. In addition, Black Hope Curse will be at select dates giving away clothing and other merch.

The band gave fans a first listen of As The Sun Sleeps a day before its release on Huffington Post. The debut album – which is officially available in stores and online via Steamhammer/SPV – is streaming now, HERE.

When asked about “As The Sun Sleeps,” guitarist and founding member Brian Jackson said: “It feels great to finally be able to release this record. It’s been finished and mixed now for about a year, but we wanted to make sure we had all the right outlets in place before we released it to the world and to the public. We are very excited to hear everybody’s feedback and are looking forward to what the new year will bring us all. I want to thank everybody that’s been involved along the way and I hope to see you all on the road soon!” Bassist Matt Snell added: “I haven’t been this excited to release a new record in years. In a sea of ‘by the numbers’ music, As the Sun Sleeps will truly be a stand out!”

Earlier this year, the band premiered their first ever music video for lead single “Feed The Fire” on Loudwire. The band also gave fans another taste this month by unveiling the title track on Metal Insider. Since the release, the supergroup has garnered much attention from fans and critics alike, leading them to a strong victory in Loudwire‘s ‘Most Anticipated Release of March’ poll. The band was able to overcome some major competition from Body Count, Art of Anarchy, Mastodon, Bush to name a few.

It may sound trite, but Invidia is truly a brotherhood. Each member of this brotherhood has a story that reflects the quote above. When they came together to make As The Sun Sleeps, they knew just what they didn’t want and how far they were willing to go to make it work on their terms.

Vocalist, Travis Johnson has been a bassist with the band In This Moment for years. His devotion to music and lack of limitations on himself brought about the desire to sing. He had tried his hand at lead vocals with other groups, but when Guitarist Brian Jackson – formerly of Skinlab and producer Logan Mader (Once Human, Machine Head) came calling, he knew that the material they were putting together was an unmissable opportunity. Brian was between SKINLAB records and the material he was writing started going in a different direction. Calling upon his friend Travis to collaborate, the pair wrote 3 songs in 3 days. Fulfilling their promise to work together, they brought their material to Logan upon his return from tour to enhance what they already had. As Brian, Travis and Logan were tracking, Bassist, Matt Snell (ex member of Five Finger Death Punch), asked them who was going to play bass for the group.  “You” said Travis, who had been in a band called Flatline with Matt. Matt brought with him a drummer who had been a local friend in Sparks, NV. With a drumline background, Darren Badorine proved himself with the group.

Each of the members of Invidia have had obstacles to surmount… have been hit hard by elements of life in the world of music. Travis applied his love of Rocky movies to the band’s story. “I’m big on the underdog succeeding – on the fact that you are never out of the game… never too far from winning.” he explained. Coming together showed them that moving forward didn’t have to be so hard – because they would do it together.