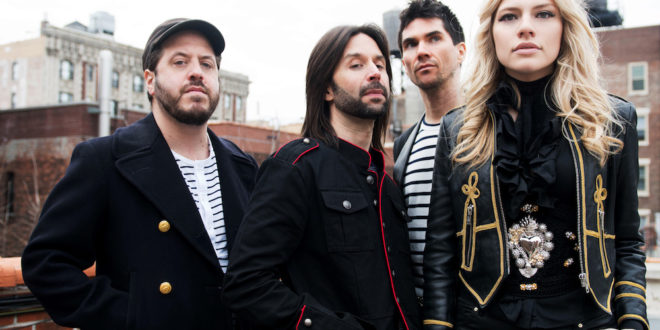 Album Review: Scarlet Sails – Future from the Past

Brian Viglione, best known as the drummer for the piano rock duet The Dresden Dolls, has returned with a new project featuring his wife, Olya Viglione. The new band, also consisting of Mark Kohut and Edward Goldson, is called Scarlet Sails and their debut full-length LP Future from the Past is one of the most diverse releases of the year thus far.

The album’s opening track, “As I Am,” has a beautiful piano and string intro which quickly transitions into a folk/country style of instrumentation. This lays out a nice canvas for Olya Viglione’s unique vocals. The rougher textures of Viglione’s voice draws comparisons to the likes of Bob Dylan and Stevie Nicks, though they carry enough distinction towards Olya’s own character. It’s around track three, “Boy You’re Wrong,” that Future from the Past comfortably settles into its rhythm. “Boy You’re Wrong” has fantastic jazz instrumentals that fit perfectly with Viglione’s biting voice. Track four, “I Found a Boat,” utilizes simpler instrumentals mainly consisting of acoustic guitar, piano, and trumpet. These subtle details perfectly lay the foundation for Viglione’s dreamy singing which is the strongest she’s performed thus far on the album and pairs well with the secretive, curious lyrics. It’s at this point that one will likely realize that this style best fits Scarlet Sails. The stripped down production gives the song an effortless aesthetic that shows the band has found their niche.

Track five, “Precious Times,” has a solid bass line that’s countered with some jazzy finger snaps mixed in. This combination not only continues the album’s classic jazz style but also adds in some slight elements of swing music as well. Viglione once again takes center stage for this song. There is a playfully sarcastic tone to her voice though it still carries a close sense of authority. These same elements continue into track six, “Spell My Name,” which features an awesome horn section and groovy guitars that create a solid rhythm. This rhythm then progresses into a fun, chaotic breakdown towards the end of the track. It’s clear that Scarlet Sails draw inspiration from older genres though it never feels as if they pander to their audience. The band pays homage to their influences while still developing their own flare to their sound. Track seven, “One, Two (FEAR),” borders the funk genre thanks to its playful keyboards and thumping bass. Viglione’s vocals carry some fantastic aggressive tones towards the end which showcases that she’s becoming more comfortable as a performer as the LP progresses.

While the jazz-oriented moments on the project definitely stand out, Future from the Past struggles with some slight consistency issues. The track “Everytime” feels like a 1980s rock anthem and seems a bit out of place within the album. It’s a decent rock track but it’s not quite as interesting as the previously mentioned songs and the glossy production tends to drown out Viglione’s vocals. The eleventh track, “Another Chance” starts off with a crunchy, almost country-rock guitar that again feels odd in the context of the entire record. This sudden shift in styles is quite jarring and the overall style doesn’t fit the band nearly as well as their jazz roots. That being said, there are bright moments in between these bursts of experimentation. The track “Butterfly” lives up to its title by having some pretty, floating piano work. It’s another simple track that is closer to Brian Vigleone’s Dresden Dolls days. The closing track, “Out of Tune” follows a similar format and concludes the album on a high note thanks to Olya’s smokey vocals which give the song an almost noir style.

Despite its inconsistent moments, Scarlet Sails have created an impressive full-length debut. The upbeat jazz elements have provided some of the most fun listening experiences of the year thus far and the band doesn’t show any signs of slowing down. Scarlet Sails have a bright future ahead of them and this album is a sign of good things to come.

Cain Miller is an aspiring writer who hopes to work his way up and gain notoriety for his material. Having written about film, television, music, and sports, Cain is always looking to gain as much experience as he can and continue to improve his writing abilities.
@cainemiller
Previous Gallery: A Perfect Circle at The Pearl in Las Vegas, NV 04/08/17
Next Detroit’s Dark Hip Hop King Swing Dee Diablo has dropped his Highly Anticipated New “Diss” Mixtape