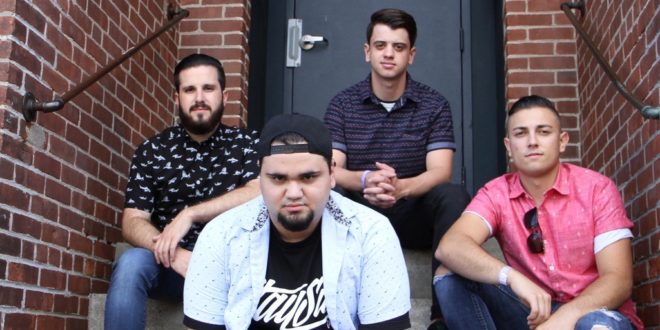 Massachusetts pop-punk quartet Ten Cents Short will be releasing their sophomore EP Major Steps, Minor Setbacks later this summer, but today, the band has shared a lyric video for the first single “Beggars”. The heavily melodic track about abandonment and acceptance is a crowd-ready, head-bobbing track, accented with an irresistible guitar lead.

“The first half of the song basically portrays a confident and sarcastic mindset of convincing yourself that you don’t need someone and life will be fine without them,” says drummer Jonathan Costa. “But as as the song progresses, you start to realize more and more that you really miss that person and you’re having trouble moving on without them. The process of getting on with your life isn’t as easy as you expected.“

Ten Cents Short was able to recruit Four Year Strong‘s Alan Day to produce and co-write the track after what many young bands would consider a dream senario at Warped Tour in 2014. “The band and I were there passing out demo CDs and flyers with our info on them throughout the day,” says Costa. “We decided to go to the Four Year Strong meet and greet and gave Alan our CD and just asked if they could take the time to listen to it and that we’d really appreciate it. We took a picture and went on with our day. A couple months went by, and Alan ended up leaving us a message in our Facebook inbox asking if we’d be interested in recording with him up in Western MA. The rest is history. Four Year Strong has inspired a lot of the songs we’ve written in the past so this was a huge opportunity for us to get to work one on one with him and his engineer Mike Harmon.“

The lyric video for “Beggars” was created by Zack Williams of ZW Multimedia and pre-orders for Major Steps, Minor Setbacks will be available soon. The remaining four songs on the forthcoming EP were co-written, engineered, mixed, and mastered by Chris Piquette at No Boundaries Studios.

Ten Cents Short was founded in Somerset, MA in February of 2014. The band released their debut EP All I Ever Wanted in May of 2015 followed by a single in December of that year. Ten Cents Short currently has plans for a Sophomore EP to be released spring 2017. With new music and a growing fan base, Ten Cents Short has their eyes fixed on a journey of fans, friends, and success in the music industry. Positive attitudes continue to drive the band to fulfill their dreams and provide their fans with high energy music and inspiring personalities.