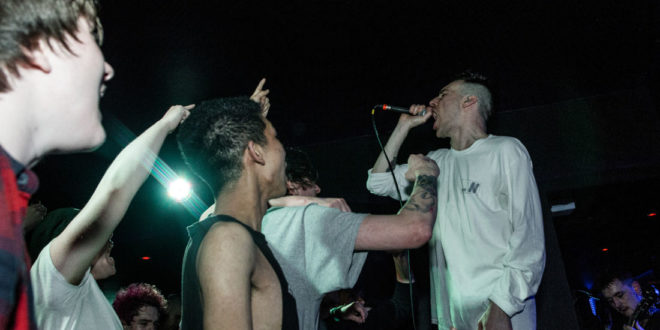 A small intimate show such as one in The Attic are always guaranteed to be a good one and this was no exception. Support was provided by local Glasgow band Swallows, welsh boys Holding Absence and Loathe. It was clear why all three bands were picked for support. If you had listened to Blood Youth before you were guaranteed to love all three supports. The local boys in Swallows provided a great warm up and start to the night and were full of energy from start to finish despite having a very hungover lead singer.

Holding Absence and Loathe gave us two very different performances, whiles Holding Absence were still heavy, the lead singer Lucas at times gave us a very indie vibe with his voice which is something I’ve never heard before but it worked really well.

Loathe on the other hand were sheer madness. The singer coming through the crowd dawning a creepy mask and a whole turn of dramatic music the whole set followed in the same way. Loud and dramatic and heavy. The crowd finding it easy to go wild for them.

But they were all leading up to the main event. Having just released their new album Beyond Repair just two days ago that’s already amassed an incredible reaction from fans and media alike. Last night was the start of a three day album release tour to promote the album. With The Attic being such a small venue it was guaranteed that it was going to get crazy and that is exactly what happened. The band came on stage with a fantastic intro also along with fantastic Lighting Show as well. Without hesitation they kicked into things right away and from the offset I could tell that the crowd was already enjoying themselves. This was my second time seeing Blood Youth and both this time and last time they have had undeniable amounts of energy which just fuelled the audiences excitement even more. It was incredible to watch because they’ve just released the album, to see just how many people already knew the words to the brand new songs. Having listened to the album before the show I knew for a fact that I was in for a treat getting to see these new songs live and I wasn’t wrong. Throughout the night the gig only got heavier, sweatier and more exciting a particular song that I was excited for was Savanna, that’s for lead singer Kaya let us know that it was about the hometown where he grew up, now for heavy/pop punk band this is quite a common thing to write about your hometown but before the show I got the opportunity to catch up with Kaya and guitarist Chris to speak a little bit about the new album and we discussed the inspiration behind the album and they told me that they wanted this album to be an angry one because it’s not what people expect it and it was evident in the song that it was built to be an angry album. Throughout the whole set when playing the new songs the band just looked so happy and so excited to be getting there a new music out there and the fans looked really really excited too because they were the first ones to hear those new songs live.

When it got to the final three songs I found myself growing a little sad knowing that it was nearly over I just wanted the night to start itself all over again. Now the Blood Youth boys played some incredible new songs throughout the whole show and it was a blessing to get to hear those incredible songs live and just how energetic and have happy in made the band feel. But before the new album Beyond Repair was released the band released an absolutely incredible EP, Closure, and they played the title track from that EP in the last three songs, now I will admit Closer is one of my favourite Blood Youth songs so I couldn’t help myself but just get right in about it and enjoy myself. Watching Blood Youth perform live is always a blessing, getting to see those boys put every ounce they have into that band is something you don’t see very often anymore. Seeing them enjoy themselves and just loose themselves in the music while they perform.

I have a lot of respect for Kaya he has the most fantastic relationship with the audience to the point where he feels comfortable to talk about things from his life things that have affected his music and share that with the people that have come to see the band but all of the band must be exactly the same, all of the songs that were written on this album have been written from personal experience and like I mentioned before were written so that this could be a dark angry album and the fact that they feel comfortable enough to share this personal things with us is just absolutely amazing. I would highly suggest if you have never seen Blood You before the moment that you get the opportunity to go see them live, take it because they never fail to put on a good show and you always on leave their shows a feeling ecstatic, electric and wanting more.

19 Years old from Glasgow Scotland, currently studying Radio at City of Glasgow College in conjunction with my own Youtube Channel!
@johnhughxs
Previous Gallery: Blood Youth at The Attic in Glasgow, 08.04.17
Next Gallery: Night Riots at House of Blues Boston 04/08/2017 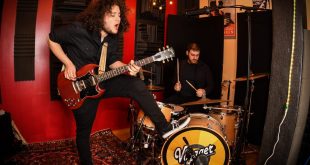 Mt. Joy had an unusual upbringing into the music industry that most artists don’t typically …