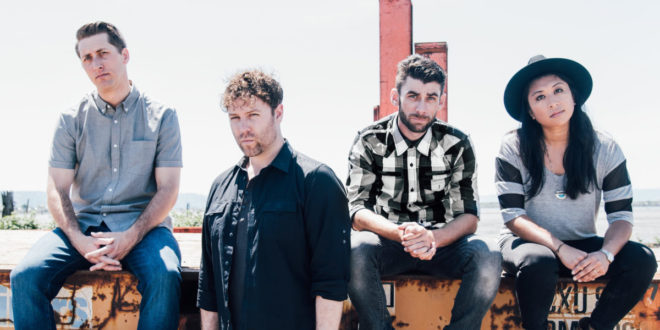 Marsalis self titled EP is a five track journey that is smooth and cohesive. The band clearly is comfortable in their own skin, knowing what sound works best for them and delivers on every single track. Here are a few standout moments.

“Where I Am” opens the EP with a heavy piano intro utilizing dark chords before the electric guitar kicks in and replaces the keys. “It’s too late. Maybe this has gotten out of hand,” lead singer Dennis Zender croons with a tenderness to his voice. It’s got a bit of a rock edge but there is a gentleness to it especially as he sings “love me where I am.” It’s such an important message, because it’s not simply about loving someone for who they are but for where they are in life. Marsalis in that one line captures a sentiment that many listeners will be able to connect with. The tune on a whole sounds like something alternative band Keane could have created back in the early 2000s but it still sounds modern and would fit right at home with mainstream radio. It’s the title track and it’s also the best song on the entire EP.

The track “Hope” has a slightly different vibe to it, but still retains the rock sound. The chorus is full and loud and when Zender reaches for his falsetto magic happens. But it’s on the verses where the song really shines. It’s quieter, with a more bare instrumentation approach, and has a more dynamic structure to it that will keep listeners on their toes. And that is why the more mainstream chorus works here, because it is unexpected. Marsalis excel at many aspects of creating memorable music, but their ultimate strength is in the songwriting. With just one lyric, one phrase, Marsalis are able to capture an intense emotion and paint a picture of a feeling without flowery imagery or big words. “Just stay alive,” Zender cries throughout the tune and when you have a song that is titled “Hope” one can see how important it is that this phrase exists. That something as simple of being alive is not simple at all and actually takes a lot of guts. For anyone who is struggling with mental health problems, this tune may just help give one hope.

“Blame it on Me” begins with a lengthy dark and gripping piano intro that is intricate and immediately sets the tone for the rest of the song. This is the type of track that is slowburning and is perfect from start to finish. One might argue and say it is very emo, but Marsalis have always been honest about their feelings in songs and it just so happens that this song indulges the content of the tune, playing up the angst that Zender delivers. There’s no mistaking that the track is very dramatic right from note one, and that unapologetic manner of the song is part of what makes it so effective. “When you give you love and you’re not the one” Zender sings on the chorus, a bit Muse – like, and it hits the heart with all the pain it is intended to afflict. There’s nothing else like it on the album.

Give this EP a listen and discover the confidence that Marsalis brings with their music.