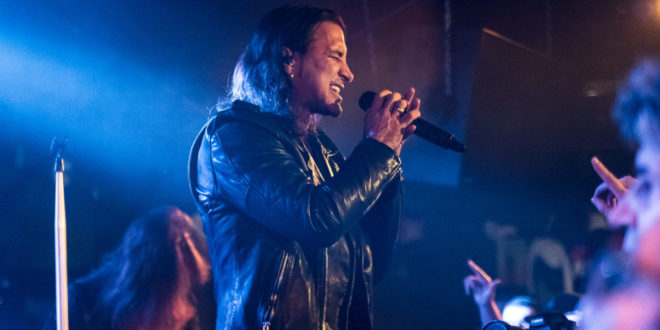 It was a purely impulsive decision that lead me to Asbury Park on a foggy Tuesday night. Art of Anarchy is currently on tour in support of their recently released sophomore album The Madness (get it on iTunes), and although The Stone Pony hosted the second show of the band’s debut tour, the night went off flawlessly. Although I was initially stoked to hear of Art of Anarchy’s lineup announcement several months ago, they fell through the cracks on my radar until recently. As such, I had a positively clean slate of expectations and was essentially floored by a brilliant, cohesive and heartfelt rock performance.

Brought together by guitarist Jon Votta, drummer Vince Votta and ex-Guns N’ Roses guitarist Ron “Bumblefoot” Thal, Art of Anarchy recruited ex-Disturbed bassist John Moyer and went on to release their self-titled debut album in 2015, with late-Scott Weiland on vocals. The band lingered in limbo until ex-Creed frontman Scott Stapp came on board. Now with the release of The Madness, and supporting tour, Art of Anarchy is getting the jumpstart kick it deserved. I find it refreshing that AOA is not marketing themselves as a ‘supergroup’ despite the incredibly successful star power within the ranks.

Art of Anarchy benefits greatly from each member’s collective experience on the arena stage and were able to bring that same kind of incendiary raw passion to Asbury Park’s iconic venue. I expect this short April tour to be only the beginning.

Check out some of the shots from the show below.