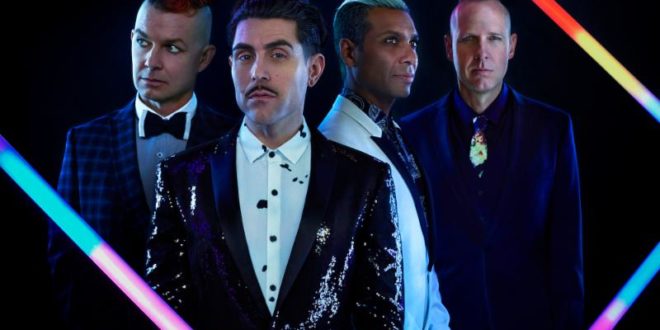 DREAMCAR today released “Born To Lie”, the expansive second track off their self-titled debut album, due out May 12 via Columbia Records. Watch the song’s lyric video below. Starting today, DREAMCAR is available for pre-order HERE. Fans who pre-order the album will receive instant downloads of “Born To Die” and debut single “Kill For Candy”. DREAMCAR features members of Southern California’s seminal pop/rock band No Doubt – Tony Kanal, Adrian Young and Tom Dumont – and dynamic frontman for AFI, Blaqk Audio and XTRMST, Davey Havok.

Later this month, DREAMCAR will make their network television debut performing “Kill For Candy” on ABC’s Jimmy Kimmel Live on April 18 at 11:35pm/10:35pm Central. The band will also perform on The Late Late Show with James Corden during the album’s release week. Tune in to CBS on May 11 at 12:37am/11:37pm Central to catch their appearance.

DREAMCAR’s sold out West Coast tour around their appearances at the 2017 Coachella Valley Music and Arts Festival kicked off this week with back-to-back nights at The Constellation Room in Santa Ana, CA. Next month the band will embark on a tour of the East Coast and MidWest. Click HERE for a complete list of upcoming live dates and ticket information.