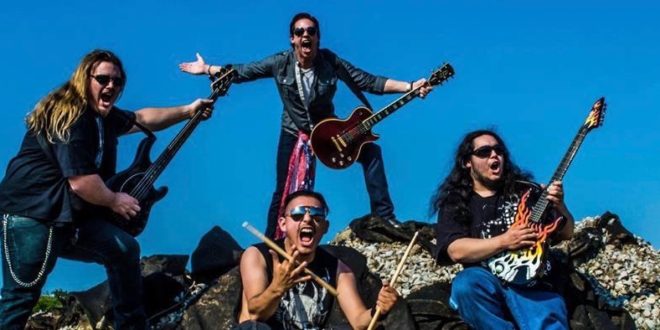 AERACO Releases Video for “Baptized By Fire” From Upcoming Album

Chicago based Rock Band AERACO has released the Official Music Video for the title track, “Baptized By Fire”, from their 6/30/2017 scheduled album. Releasing via Dark Star Records in association with MVD and Sony Music Entertainment, Baptized By Fire was produced by Aeraco, recorded and mixed by Bruce “Beast” Smith and mastered by Grammy award winning engineer Brian “BigBass” Gardner.

We are extremely proud of what we’ve done. All of our careers have led to this point and we feel like we were made to make this album. To say we’re excited would be a huge understatement! – Aeraco

Aeraco is America’s hard rock band, born and bred in Chicago, IL Zero cliche’s, no games and you won’t find any gimmicks here. Leave what you know about rock n’ roll at the door and get ready to rock n’ roll! With influences drawn from old school 80’s metal and newer modern metal-Aeraco delivers. Having a powerful vocal section, songs with blistering solos and melodic riffs, a pounding rhythm section and hard hitting bass, Aeraco is sure to send your sanity into the abyss.

Combine their sound with their live show and you have a clash of the musical titans. Headbanging and wild stage antics aren’t just the norm at every show… they’re a requirement. Aeraco’s explosive performance is certain to elevate some heart rates and give concert goers an adrenaline rush. If you’re thinking guitar playing behind your head, engaging stage banter, guitar battles and sheer musical mayhem, then you’ve come to the right place.

Self produced, self financed and self run, Aeraco is a heavy metal powerhouse thats here to stay. They have performed across the country and have shared the bill with some of the worlds biggest rock acts including Alice in Chains, Rise Against, Hollywood Vampires, Dokken and more. They’ve also played some of the most iconic venues, biggest fests and incredible state fairs this country has to offer.

Aeraco’s material has garnered them worldwide attention with impressive testimonials from venues, festivals, magazines, bloggers, fans and more. Their music videos in combination with radio play in countries like the U.S., Italy and the United Kingdom have given the band a growing fan base. The family of outlaws, bandits and public enemies continues to grow in numbers.So if you consider yourself a rebel, a mutineer and an outlaw… then you’re going to fit right in. Light your torches and round up your crew because its time to join the gang. Mischief and mayhem is the standard around these parts. Are you locked and loaded? Because we are!