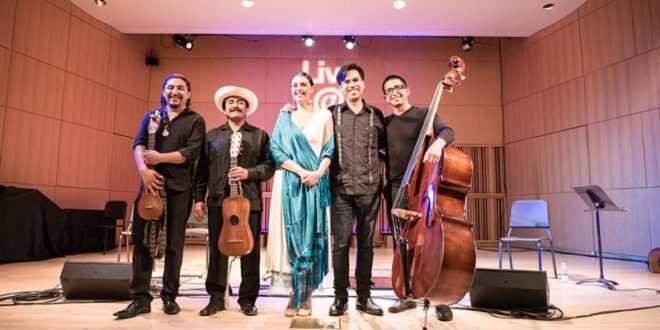 Radio Jarocho & Zenen Zeferino: An Exploration of Son Jarocho’s Past and Present – April 6 at 8:00 pm

New York City son jarocho pioneers Radio Jarocho present a new project exploring the origins of son jarocho, the traditional music of Veracruz, Mexico. In this journey through the genre’s baroque, West African, and indigenous Mexican roots, Radio Jarocho & Zenen Zeferino will trace son jarocho from its rural ancestry to the global phenomenon that it is today.

Radio Jarocho promotes and preserves son jarocho, the traditional music, dance, and culture of Veracruz, Mexico. A mix of Spanish, Indigenous Mexican, and West African rhythms and instrumentation, son jarocho is usually played in a community celebration called fandango, though in the last few years it has also become a music and dance that is formally presented on stages both in Mexico and in the United States. Radio Jarocho are pioneers of son jarocho on the East Coast, having promoted the fandango tradition since 2007. The group is now collaborating with singer, jarana player, and poet Zenen Zeferino, a living legend and one of the foremost representatives of son jarocho. Zeferino hails from a family of traditional singers, dancers, and poets and has dedicated his 25-plus year career to making the music of his forefathers known outside of Veracruz and Mexico. Radio Jarocho & Zenen Zeferino are currently playing concerts and fandangos in New York City and touring the East Coast to present original material and songs from the tradition.

Previous Bayside and Say Anything Cover Each Other’s Songs Ahead of Co-headlining Tour
Next Gallery: Otep at Vinyl in Las Vegas, NV 03/23/17