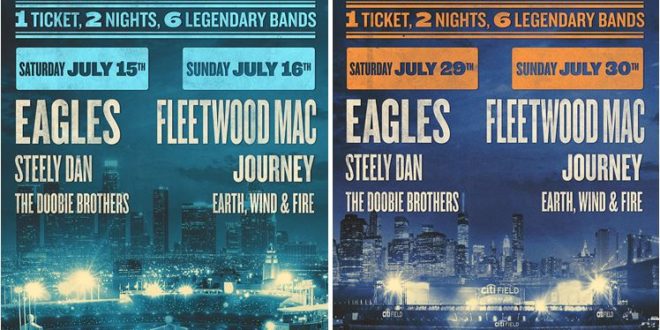 The Eagles and Fleetwood Mac will headline two of the most anticipated concert events this summer – The Classic West on July 15-16 at Dodger Stadium in Los Angeles, and The Classic East on July 29-30 at Citi Field in New York.

The Classic West will host the Eagles, Steely Dan and The Doobie Brothers on Saturday July 15 and Fleetwood Mac, Journey and Earth, Wind & Fire on Sunday July 16.

The Classic East will host the Eagles, Steely Dan and The Doobie Brothers on Saturday July 29 and Fleetwood Mac, Journey and Earth, Wind & Fire on Sunday July 30.

The Classic West and The Classic East will be the first time in history that these six esteemed artists have ever played together on the same stage in two of America’s greatest cities for rock & roll.

Tickets for both The Classic West and The Classic East can be purchased at Ticketmaster.com.  Two Day Reserved Seat Ticket Packages, will go on sale for each city on Friday April 7 at 10 AM local time.  Special VIP packages will also be available, including premium tickets, pre-show VIP lounge, exclusive merchandise, parking and more.

American Express® Card Members can purchase tickets before the general public beginning Monday, April 3 at 10 AM through Thursday, April 6 at 10 PM.

For complete information and to view the event trailer, visit theclassic.com.

The EAGLES are one of the most influential and commercially successful American rock bands of all time. With their profound lyrics, harmonies and country-tinged melodies, they created a signature Southern California sound. The Eagles have sold more than 120 million albums worldwide, have scored six #1 albums and have topped the singles charts five times. The band has been awarded six GRAMMY® Awards. The Eagles have performed sold-out concert tours worldwide throughout their career. The band’s 2014 History of the Eagles Tour broke numerous U.S. box office records and included five sold-out concerts at Madison Square Garden in New York, NY and six sold-out concerts at the Forum in Inglewood, California.  The Eagles were inducted into the Rock & Roll Hall of Fame in 1998 in their first year of eligibility and received the Kennedy Center Honors last year. Check Eagles.com for more information.

As one of the best-selling bands of all time, FLEETWOOD MAC has sold more than 100 million records worldwide and established their place in rock ‘n roll music history. Having created a distinctive sound that endures today, the GRAMMY-award winning band was inducted into the Rock & Roll Hall of Fame in 1998.  With countless chart-topping albums and singles, their 1977 album Rumours remains one of the best-selling albums of all time. Fleetwood Mac most recently completed their 2015 On With The Show world tour, where they toured as a five-piece for the first time since 1998 featuring the five band members from the classic and most successful line up back together, with Christine McVie rejoining band mates Mick Fleetwood, John McVie, Lindsey Buckingham and Stevie Nicks.  The tour sold out arenas across the globe and showcased the classic hit songs from the band’s career that spans more than four decades. Please visit the official website for more information.

Led by Donald Fagen and Walter Becker since 1972, STEELY DAN has sold more than 40 million albums worldwide and helped define the soundtrack of the ’70s with hits such as “Reelin’ in the Years,” “Rikki Don’t Lose That Number,” “F.M.,” “Peg,” “Hey Nineteen,” “Deacon Blues,” and “Babylon Sisters,” from their seven platinum albums issued between 1972 and 1980 — including 1977’s groundbreaking Aja. Steely Dan reunited in the early ’90s, launching a string of sold-out tours (that continue through today). In 2000 they released the multi-Grammy winning (including “Album of the Year”) Two Against Nature, and released the acclaimed follow-up Everything Must Go in 2003. Steely Dan was inducted into the Rock and Roll Hall of Fame in 2001.

Since its formation in 1973 in San Francisco, JOURNEY has sold more than 80 million albums worldwide, earning 19 Top 40 singles and 25 gold, platinum and multi-platinum albums, and has headlined multiple sold-out stadium tours. The Greatest Hits album is certified 15 times-Platinum, bringing Journey into the elite club of Diamond-certified award holders.  Journey received a star on the Hollywood Walk of Fame, was inducted into the Hollywood Bowl Hall of Fame, and will be inducted into the Rock and Roll Hall of Fame in April.  Founding members Neal Schon & Ross Valory, and longtime members Jonathan Cain and Arnel Pineda, welcomed virtuoso drummer Steve Smith back into Journey for their “San Francisco Fest 2016” tour, marking the first time Smith performed with the band since 1998.  Since Arnel Pineda joined Journey as its new lead singer in 2007, the band has released two albums and embarked on seven major tours, performing on four continents for more than five million fans.  Check Journeymusic.com for more information.

With a signature sound beyond categories and a groove as deep as the soul of the planet, EARTH, WIND & FIRE’s legendary journey began in 1969 and has set the standard for music of all genres. The band has released a total of 23 albums, recorded eight No. 1 R&B singles, produced eight Double Platinum Top 10 Pop Albums, earned more than 50 Gold and Platinum albums and sold more than 90 million albums worldwide. In 2000, EWF was inducted into the Rock and Roll Hall of Fame and The National Academy of Recording Arts & Science (NARAS) bestowed its highest honor and presented the Grammy Lifetime Achievement Award to the band in 2016 – the ninth Grammy Award for the band. Visit EarthWindandFire.com for more information.

THE DOOBIE BROTHERS have been delivering mind-blowing, roots-based, harmony-laden, guitar-driven rock and roll for over four decades, selling more than 48 million albums and winning four GRAMMY® Awards. Their latest album, Southbound, on Arista Nashville, features new recordings of the band’s iconic hits, with country music’s biggest stars including Blake Shelton, Zac Brown Band, and Brad Paisley. Boasting one of the most loyal fan bases in music, the band continues to write and record new material and tour the world.  Their No. 1 singles “Black Water” and “What a Fool Believes,” both gold, lead a catalog of indelible songs that include “Listen To The Music,”  “Jesus Is Just All Right,” “Rockin’ Down the Highway,” “Long Train Runnin’,” “China Grove,” “Take Me In Your Arms,” Takin’ it to the Streets,” “Minute by Minute,” “You Belong to Me,” “The Doctor” and more.  In all, the Doobies have tallied-up five top 10 singles and 16 top 40 hits.  Beginning with their multi-million-selling sophomore collection Toulouse Street, the Doobies have 3 multi-platinum, 7 platinum, and 14 Gold albums. Their Best of the Doobies album has sold more than 12 million copies – a rare “diamond record.”

Artist interviews at The Classic East/West will be broadcast on Sirius/XM.

Previous Brooke Moriber releases “For The Gold” feat. America’s Got Talent veteran Sky Katz
Next Music video for Here We Are by \’mēk\ 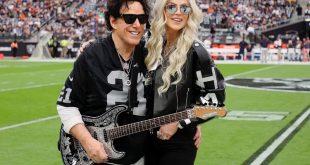