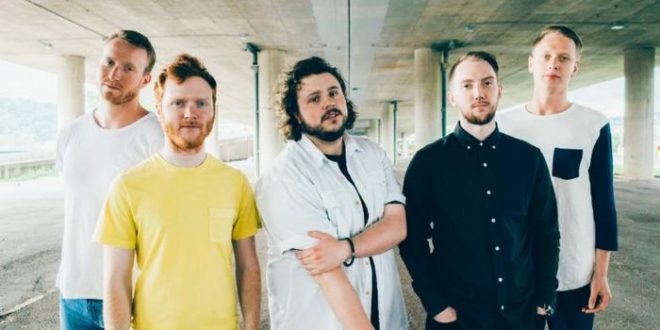 As we settle into the latter half of the 2010s, our understanding of social complexities continues to heighten. Love and relationships tend to comprise a significant aspect of that matter. In most instances, they provide consistent solace and opportunity to be open; in others, a parting of ways takes place. But regardless of circumstance, we learn to ultimately forgive and move forward.

Indeed, West Virginia alt rockers A Story Told are experienced in these happenings. The Charleston quintet encapsulates the latter perspective in their current single, “Weather,” from their latest album, Keep Watch. Released last month, the single has become continually embraced as much for its stylistic contrast as its lyrical poignancy. For further insight, I reached out to Josh Allen, one of the band’s two guitarists, who was willing to expound on the single’s content from both a creative and personable standpoint.

The genesis for “Weather” was part of an ongoing process maintained throughout the album. Allen recalls its ideas arising from a feeling of momentary rawness. “We like to write from a state of authenticity, and I think it’s safe to say that ‘Weather’ came to be by pouring our passion into the music and wearing our hearts on our sleeves,” says Allen. The song features an exclusively piano-based aesthetic, of which the band was grateful for implementing. While Allen claims that there are far more forthright, guitar-driven examples on Keep Watch, he marks “Weather”’s significance in rounding out its focus. “I feel as though the change in tone was the right move to make. We wanted the song to feel very stripped down and stand out from others on the album.” He reiterates, “[P]utting the sound of the piano at the forefront was a very effective way for us to give our fans a change of tone and a glimpse into another side of the band.” With that stylistic change, Allen and company solidified the song’s thematic angle—reflection on past relationships. Through that experience, what results is a hard dose of tough, yet much-needed emotional maturity. “Everybody who’s lived through that will think about the “what ifs” that follow and how things could’ve been different. This song, at its core, is about understanding that in the end you must accept that that’s life and you have to find closure.” “Writing these lyrics was a very sad and emotional process,” Allen admits, “But it also led to a lot of clarity and closure.”

Taking the song’s context into mind, Allen personally reflected on what he had learned once true colors were revealed on either side. “People are often very complicated, especially when love is involved. No one is perfect, but we must accept the fact that the flaws in people often help to make them the person they are, for better or for worse.” Following that statement, Allen emphasizes, “Honestly is one of the most important parts of being in a relationship, and being true to yourself is the only thing you can do. Sometimes that works out for the best in a relationship and sometimes it’s a sign that maybe it’s not meant to be.” During creation of the song’s music video, the band aimed to explore theme of a failed relationship. A man and a woman are portrayed separately walking through various isolating scenarios, each shot emanating a feeling of emotional, as well as physical distance.

Since the release of the video, fan reaction to the song has proven even more positive. Allen then reflects on the band’s personal growth, given “Weather”’s success.

“The greatest gift that we’ve discovered is knowing that it’s okay to put ourselves out there emotionally and wear our hearts on our sleeves. Authenticity goes a long way in songwriting and it’s easy to see if someone is just phoning it in. Moving forward as a band, we’re going to take heed to the lessons learned in this process and continue writing real, honest, passionate music that we hope our fans will continue to support and enjoy.”

I come from a family who is passionate about all things music. I learned to sing at an early age, and by 13, had my very own Fender Strat guitar. I tried my hardest at learning all that I could. Because I was born with cerebral palsy, I had to teach myself an adaptive playing style. I learned to write and record my own music, despite these difficulties. In college, I started making great use of my writing abilities by reviewing music, as well as copy editing. I guess it's best to stick with what you know, while welcoming a fair challenge at the same time.
Previous Single Review. Ivan Beecroft: “Believe”
Next Gallery: Mac Sabbath at The Wellmont Theater in Montclair, NJ 03.28.17