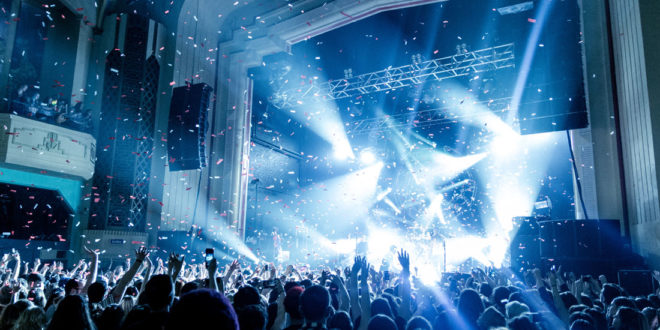 Waterparks and SWMRS provided tonight’s support at the All Time Low show and honestly they were a strange choice but both provided a lot of excitement.

Waterparks were a lot of fun and they are a band who know how to act on stage, they kept up the crowd participation all night and there were even some big Waterparks fans in the crowd as well.

SWMRS for me were a very weir but cool band. The best way I could describe them is the kind of band you see in those American movies that get started in a garage and just blow up. Their music style is something I can’t really describe but I really really enjoyed it and they’re for sure a band I would go see again.

The other day I realised how old I felt when I realised the first All Time Low album I bought came out when I was just 13. After 7 years and several shows seeing them since 2012 nothing had changed. When you grow with a band, you might grow out of the hardcore fan phase but seeing them live again, always brings out that inner EMO again and the show was no exception to that. Kicking things off was a newer song “Kicking and Screaming” which started off the crowd and launched straight into some older songs “Weightless” and “Somewhere in Neverland” which just seemed to step in the craziness of the crowd.

It made it very evident that there were a lot older fans in the audience. The O2 Academy is a massive venue and to see it packed, with not one pair of feet touching the ground was amazing. Having not really listened to much of the Future Hearts album before, hearing the songs live made me want to go and listen to it all the way through and take it all in. Though the songs did sound incredible, the highlight for me was hearing “Canals” an old but gold song that I had never heard live before so it was a nice little surprise to see some old and barely played songs on the set list like “Canals”, “Guts” and “Six Feet Under The Stars”. From my first show back in 2012 to now, like I said, All Time Low haven’t changed a bit. They are still the same excited, fun loving band who made crowds unbelievably happy. That’s one thing I admire about All Time Low, there ability to react with a crowd, to make them laugh so much till their sides hurt and last night just confirmed that. Jack was flouncing around on stage wrapped in an adorable feather pink boa and of course the band were in awe to the Scottish’s Here We chant and the newly acquired ‘Yer da sells avon’ which greatly confused Alex, to the point he handed his microphone to someone in the front row to explain the joke. Bands that interact with their crowds like this are my favourite and All Time Low have it down to a T.

Now when a band releases new music, sometimes, even if you haven’t listened to that particular album you will catch a few singles and that was exactly what it was like when they played the two first singles of Future Hearts. Now there may have been older fans there but judging by how crazy the crowd got during these two, it was clear these were step up songs for the band since the albums release, songs that have gained them a lot of followers. “Kids In The Dark” a song that send out a really strong message was one of the most fun of the night. 25 huge beach balls were sent into the crowd and people were sat on shoulders and everyone was just dancing and having a good time. It was like for a song with such a strong message to teens, you could clearly see people loosing themselves in the music and that’s what concerts are all about. Off the back of the two newer songs we got to hear “Dirty Laundry” which is fresh of the new unreleased album and it was crazy to see so many kids already knowing the words. Now if there is one thing I can predict at an All Time Low show it’s that when the rest of the band leave Alex on stage himself it can only mean one thing. “Therapy”. I have see this song live every time I’ve seen the band preform and every time I see it is till shed a year and get all emotional because it really tugs at the heartstrings. That however wasn’t the only slow song in the set, right after they played a newer song “Missing You” which I’d heard a couple of times on the radio but seeing it live made me appreciate it all the more.

But not to keep things on a lower note for too long the rest of the band came back on and gave one hell of a performance for the final few songs. Of course it was lead by the typical “This is the last song” speech and then the almighty encore. For anyone who’s barely heard of All Time Low I can bet you that you will know at least two songs and of course, both of those were picked for the Encore. A quick chant and immediately the band were back on stage. The whole venue being impressively lit by their incredible lighting rig as the launched into “Lost In Stereo” and I don’t think there was a single person not singing a lot. Mums, dad’s, hell even the bartenders were singing and the same went for the final song of the night. “Dear Maria”. It’s hard to describe the energy I felt during that song – the room was electric; hands in the hair; feet off the ground and the words being belted out at the top of everyone lungs. Of course, All Time Low went out with a bang…literally. Two giant confetti cannons exploding white and red confetti over the crowd as the band said their thank you’s. No matter what happens or how old I get. I will never be old enough to see All Time Low and enjoy every second.

Galleries can be seen here:
Waterparks
SWMRS
All Time Low