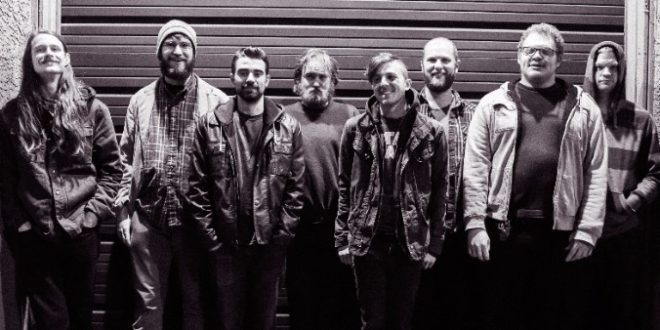 Eight piece band OhBree’s new album Burn Bridges, Burn Pies is a 13 track journey that has a little bit of music for everyone. Switching off between longer and quite shorter songs allows the band to stretch their songwriting muscles and showcase that no matter the length of a tune they can deliver great music.

“16 Years” uses a retro outline pulled from the 60s with a modern vocal twist to create a piece of art that is wholly memorable. Horns are predominant on the track, something one rarely hears in mainstream music today, and while this tune is not exactly top 40 material in todays musical landscape, one can imagine this being a big hit a few decades ago. Lead vocalist Andrew Scott has a nasal, almost punk tone to his voice which brings the track up to date and perfectly mashes together a throwback meets modern sound. The melody is extremely catchy, and will be sure to get listeners toes tapping. It relies heavily on an almost bluesy-jazzy feel while still retaining an alternative sound and the result is spectacular. If there is any song on the album that deserves to be the leading single this is it.

Meanwhile “Skeleton Avenue,” which is one of the album’s singles, is totally worth the honor. The vocals are layered and it is reminiscent of something The Beatles, Paul McCartney in particular, could have written and constructed. It has a playful sound but the lyrics are anything but (“It wasn’t it me on Skeleton Ave. It wasn’t F*cking me). The broad scope of instrumentation used on the track, piano, horns, and a rattle of percussion add to the dynamic sound that the band has nailed down. It’s fun and has a bit of a kitschy vibe all the while completely entertaining from the first to last note. Once again OhBree prove that they are unique, not in competition with any other artist but themselves. They are making music they want to make and it just so happens that listeners will be drawn to it. Though “16 Years” has all the makings of a single, “Skeleton Ave” is the track that is the best on the entire LP.

The one song that sticks out the most on the record, due to the drastically different sound, is “Motivation for a Dying Man.” It is a completely  different look for OhBree as they try on their folk singer hats and it is successful partly due to Scott’s committed vocal stylings, but also the simple lyrics that tell an engaging story. “Well I am burning in my own living Hell and like a living Hell I am burning,” Scott sings. It is this clever play and reversal of phrases that is used several times throughout the track which gives the song the legs it needs to stand on. It’s straightforward and smart with minimal instrumentation, no horns this time, which helps sell the tune as a folk song. It also becomes a round which is perfect right until the end where takes a slight off putting turn with beeps and experimental instrumentation that abruptly cuts off. Still it is one of the highlights of the album.

The LP is 99% a success but there are a few tunes that come up short. “Spine” suffers from such a fast pace that is hard to process what one has just heard. It’s interesting but it doesn’t quite work. Meanwhile other tracks like “Which Doctor Witch Doctor” are just a bit lacking when stacked up against the rest of the record.

Still OhBree has created a piece of musical art that is worth a listen to and their originality is something that will carry the album far.