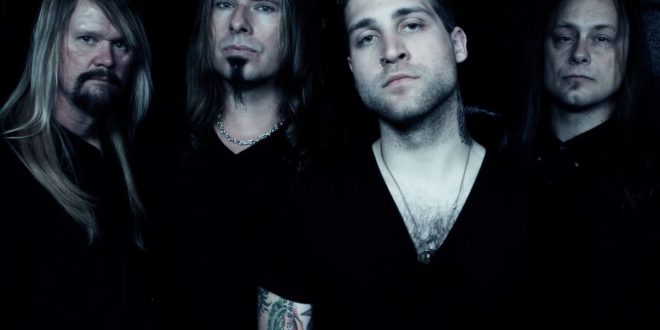 In the saturated and sanitized realm comprising most modern heavy rock, Emperors and Elephants prove a continually upstanding act. The Chicago quintet has earned substantial traction since their formation over half a decade ago, thanks in part to their assiduous touring ethic. After competently fostering a nationwide fanbase via their debut, Devil in the Lake, tragedy ironically tested the band’s will. Founding lead guitarist Jeff Windisch succumbed to an irreparable heart attack while supporting Lynch Mob. Thus, Emperors and Elephants took a much-needed lapse to reassess their proclivities.

Upon return, their follow-up, Moth, sports a newly raw and unhinged aesthetic. This is quite an admirable feat considering the streamlined nature of their debut, so as to bolster an equally stylistic and personable impact going forward. The brooding intro riff in “Hidden” is a testament to the band’s transformation. There’s a warmth emanating from the layered guitars, while complementary sizzle and crackle of the drums suggest a live approach. Once a wailing lead melody enters the mix, a command is implemented for the band’s latent energy to gradually unravel. Subsequently, vocalist Jesse Andrews glides along the chord sequence, shifting to a piercing chorus shortly beyond the 1:00 mark. At this point, the interplay between riff and vocal hits hard. Andrews’ tonality sears through instrumentation, emanating the angst that is projected from having felt deceived. In its halfway point, I especially appreciated the experimental implantation of rain-like, percussive ambiance. That aesthetic is carried over into the following track, “Not Today.” While the reverberation is essentially left intact, the song initially comes off like the intro to a rave. It quickly turns into up-tempo metal riffing, with an appeal that catches on as soon as the transition is made. The slight textural influence during the verses works well in elevating Andrews’ vocals. As the song progresses, the layers of riffing continue to sport an experimental vibe to them, with subtly nuanced emphasis on the rhythm’s pickups. Interestingly, a broader spectrum of atmosphere is brought about by the next two tracks, the synth-rock influenced “Porcelain Kiss” and the acoustic “Cracks in the Wall.” Both are direct and indirect references to a scattered mind, further enforcing the angle of one’s true colors being revealed. It’s at this point when I really started focusing in on the band’s current sound—inherently dark, sporting something of a murky structural foundation, but focused all the same. Even with the songs’ more or less straight ahead arrangements, they are simply a foundation for the variety to return. “Poison” begins with a mechanized hum, punctured by sparse strikes of down-tuned chords. The inverse subsequently takes shape, featuring subdued, fuzzed-vocals and bold percussion. Further down, the elements work together in separating two extremes—the deepest extent of defeat, and an almost transcendental control of one’s circumstances.

At the halfway point of the album, “Chicago” showcases a classic rock vibe, with an organ-based bed and complementary swagger from both the guitar and percussion. From the way its pacing plays out, it’s as if Andrews is referencing a scenic allusion to the aftermath of a rough-and-tumble scuffle. The chorus gives way to a feeling of numbness, insinuating that such instances are an everyday occurrence, whether theoretical or directly happening. Its successor, “Give Away the Sun,” increases the album’s momentum. With knife-like riffing and a blistering midtempo groove, it is the heaviest track by far. To some degree, it acts as an expounding of the previous song, this time delving into the subject’s very core. Optimism dissipates and hope bleaks to grey, although a persistent tenacity is implied by the sharpness of the percussion. “Jester” maintains a type of noir-esque vibe, accentuated by Andrews’ clean stationary baritone and piano accompaniment. The instrumentation during the chorus envelops the vocals in such a sensible way, filling both sides while allowing them the room to shine. Something about the self-deprecating, yet humble nature of its context provides a refreshing pace. The next track, “Trigger,” contrasts, denotes a slash of any semblance of hope. However, it sheds a light on fickleness being a part of human nature—one momentary period of calm is trampled by voluntary chaos, sparking wrongful and unnecessary tension. What is also apparent, besides the thematic contrast, is that of the two solos—the first is thin and buzzing, the second fuller and more direct. “Whisper in the Storm” holds similar qualities, although the buildup feels better implemented. From a commercial standpoint, it has just the right structure to have hooked me in through its balanced dynamics. Andrews’ vocals are the most seamless here, and especially blend with progression of the riffs. The penultimate “Hold You Back” highlights a sense of command. Despite how its title appears at face value, its context pertains to snapping back into reality, in attempt to essentially free the person at fault from their wrongdoings. I was surprised by the band’s inclusion of this song, initially from its power ballad structure, but then even more so its presentation proving substantial nonetheless. For the final track, the band lays down a faithful rendition of Chris Isaak’s “Wicked Game.” This ultimately wraps the album’s sequence effectively, not only in the direction that the latter portion that the album takes, but in terms of what the band’s direction for this album wholly signifies.

Overall, Moth is an undoubtedly a more varied and poignant album than its predecessor. The riffs and themes emit dominant darkness with glimpses of hope, all the while bringing a better utilized cohesion throughout. But as part of the band’s bigger picture, the album is a sincere means of honoring a fallen comrade, and carrying a legacy that will only bring further success to their career.

I come from a family who is passionate about all things music. I learned to sing at an early age, and by 13, had my very own Fender Strat guitar. I tried my hardest at learning all that I could. Because I was born with cerebral palsy, I had to teach myself an adaptive playing style. I learned to write and record my own music, despite these difficulties. In college, I started making great use of my writing abilities by reviewing music, as well as copy editing. I guess it's best to stick with what you know, while welcoming a fair challenge at the same time.
Previous Album Review. OhBree: Burn Bridges, Burn Pies
Next Gallery: Raging Fyah at Brooklyn Bowl in Las Vegas, NV 03/12/17