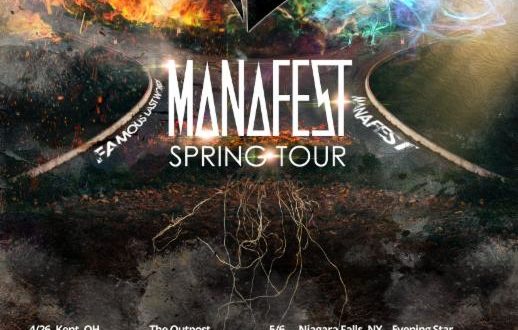 Post-hardcore outfit, Famous Last Words has had quite the year thus far with the release of their third studio album, The Incubus (released on 9/30/16) and tour announcement with fellow Revival Recordings label mates, Atlanta rockers The Funeral Portrait. Today, Famous Last Words is thrilled to announce they will be hitting the road on a co-headlining tour with MANAFEST with support from It Lives It Breathes. The tour kicks off April 26th in Kent, OH and will wrap May 13th in Memphis, TN. Tickets are on sale now and can be purchased at RevivalRecs.com.

The 12-track masterpiece, The Incubus was produced by Taylor Larson and features guest vocals from prominent artists: Matt Good of From First to Last, Spencer Sotelo from Periphery and From First to Last, Ricky Armellino of This or The Apocalypse, and Emily Piriz a former American Idol contestant. Laced with heavy guitar riffs, catchy hooks, folly, and symphonic elements, the band, notorious for their story telling and theme creations have transformed The Incubus into more of declaration for change than any previous album. To learn more about the story behind The Incubus, fans can head straight to Metal Underground now to steam the album in full. Fans are encouraged to listen here!

Off the album, Famous Last Words unveiled “Pretty in Porcelain,” where the band introduced their concept for the record. The band’s lead vocalist, JT Tollas elaborated, “All of our full-length albums have told stories that tackle extremely difficult situations…The Incubus, tackl(es) the issue of sexual and domestic abuse. I felt it was important to step forward and really bring this relentless issue to light.” In the video the band introduces their main character, Christine and a story told through her perspective as a stay-at-home mother in the 1950’s. She becomes determined to figure out the cause of her blackouts and interpret the vicious nightmares that endlessly torment her every time she falls asleep, all while simultaneously caring for her family and struggling daily with the gender stereotypes many women had to deal with back in post WWII America. Christine represents anyone who has ever been a victim of abuse, and unfortunately, a lot of the issues she deals with in the album are still problems that are prevalent in today’s society. Continuing this story, Famous Last Words, partnered with Huffington Post to unveil “The Judged,” a story in which Christine finds herself in a courtroom on trial for being a ‘rape victim.’ Listeners can hear the play on lyrics to which the singing and screaming showcase two characters, Christine and the prosecutor. Tollas explains, “It’s meant to show the absurdity of blaming oneself for being the victim of sexual/domestic assault.”