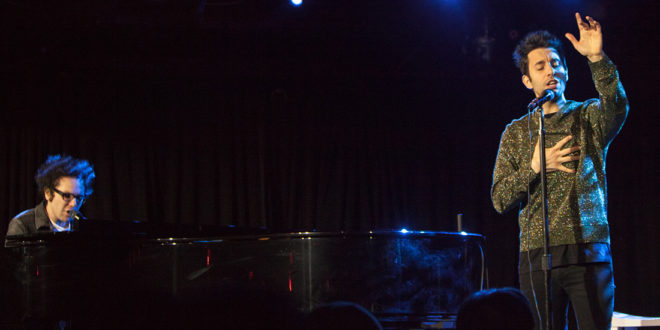 A Great Big World played a stripped-down set called “A Night with Ian and Chad” at Le Poisson Rogue in New York City last week.  I was pretty excited to get to see them at an intimate venue like this. In a time of sometimes over-produced music, it’s refreshing to hear musicians and singers perform live and sound like they do on their record.

The band is comprised of two members—Ian Axel and Chad King—who studied music at NYU in New York City. This is the second time I’ve been able to see them live, and their energy level is always incredible. They just look like they are having so much fun performing. At one point during the show, King commented that he was excited to be performing songs they wrote in their living room. In addition to the two of them, they brought up a few of their musician friends from the area to help them perform a few songs.

King is definitely chock-full of entertaining antics, like when he asked the audience for song requests and then corrected them, telling them which song it was they really wanted to hear. They ran a contest where fans could come up and help them sing on stage, which resulted in several audience members jumping in to sing, “Shorty Don’t Wait.” After that, King announced that he doesn’t like encores, so they were just going to stay on stage and play a few more songs. I am fully in support of this idea. They played 3 extra songs, including, “Already Home,” which was the request the audience kept asking for earlier in the evening.

My favorite moment was at the end when they played a cover of Randy Newman’s, “You’ve Got a Friend in Me.” Axel started off playing the piano while King sung, but King stopped him halfway through and asked if he could try playing for once. Axel said jokingly, “I don’t know, it’s a really hard song.” So they switched it up as King played on the piano and Axel sung. The pair ended the song and the night with both of them playing the piano and singing together.

Fun Loving Music Photographer and lover of live music in general. I am most likely to be spotted with a coffee in one hand and a camera in the other, somewhere in Philadelphia, New York City and everywhere in between. For more of my music photos: http://myphotos.bellemorephotography.com/
@bellemorephoto
Previous Alien Knife Fight Solidify As Indie Rock’s Best Kept Secret with “Flight Plan”
Next Brooke Candy Releases Moving Music Video for “Living Out Loud”