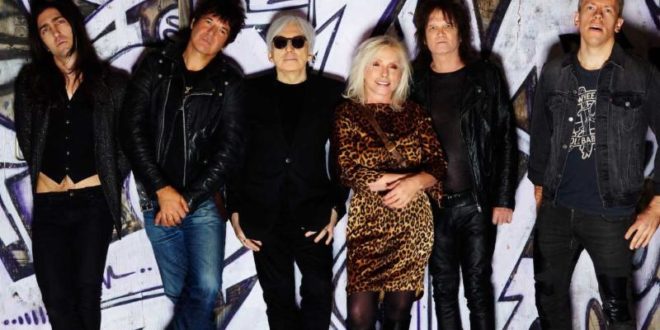 Today, Blondie has released “Long Time,” the new single off of the band’s forthcoming 11th studio album Pollinator (BMG). Blondie collaborated with Dev Hynes (AKA Blood Orange) on the new track that pays tribute to the band’s 20th Century trailblazing, while fitting perfectly in a 21st Century pop landscape. “Long Time” channels a deliberate echo of Blondie’s 1979 anthem “Heart of Glass,” before lifting off with a swirling mix of intense drumming, glorious 80s synth, funky guitar riffs and a thumping baseline.

“Long Time,” which is now available instantly with the album pre-order, follows Studio 54-esque lead single “Fun,” written by Dave Sitek (TV On The Radio). PRESS HERE to watch the video for the frenetic track that was directed by Dikayl Rimmasch, who has also worked with Beyonce on both the Lemonade videos and her Formation World Tour.

750 7″ copies of “Long Time” will be released as a Record Store Day exclusive in the US – the 7″ includes the single and a non-LP cut of “The Breaks,” a brand new track written by Chris Stein and Debbie Harry in the album sessions at New York’s famed recording studio The Magic Shop. For a full list of participating stores go to www.recordstoreday.com.

Blondie‘s sound and sensibility is as fresh on Pollinator as when they first topped the charts. The band has enlisted an eclectic group of songwriters for their most collaborative album to date. Those offering their own interpretation of the band’s legacy are superstar Sia, Blood Orange frontman Dev Hynes, British singer Charli XCX, Dave Sitek (TV On The Radio), Nick Valensi (The Strokes), Johnny Marr (The Smiths) and Canadian movie blogger and indie rocker Adam Johnston (an Unkindness). The LP, produced by John Congleton (Franz Ferdinand, St. Vincent, Sigur Ros) and recorded at NYC’s famed studio The Magic Shop, also features vocals from Joan Jett, cross dressing comedian and singer John Roberts and The Gregory Brothers (founders of Songify the News). Laurie Anderson appears on a special hidden track on the CD version.

Blondie will bring their one-of-a-kind live magic to the stage when they kick off their North American co-headlining Rage and Rapture Tour with Garbage on July 5th. Tickets are on-sale now. The band also recently announced a return to the iconic Roundhouse in London on May 3rd to celebrate the release two days later of their remarkable new album.

For the last four decades, Blondie – Debbie Harry, Chris Stein, Clem Burke and long-standing band members Matt Katz-Bohen, Leigh Foxx and Tommy Kessler – has become and still remains a true national treasure; one whose influence both shaped and continues to inform the worlds of music, fashion and art. From an irreverent Lower East Side punk outfit to bona fide international ambassadors of New York cool, Blondie will forever be synonymous with that punk spirit that lives somewhere in all of us. Their chart-topping success, fearless spirit and rare longevity led to an induction into the Rock ‘N’ Roll Hall of Fame in 2006, a NME Godlike Genius Award in 2014, a Q Award for Outstanding Contribution to Music in 2016, and more than 40 million albums sold worldwide to date.

Previous Tigers Jaw Return with New LP “spin”
Next Gallery: Andrew McMahon in the Wilderness at Delmar Hall in St. Louis, MO on 3.20.17