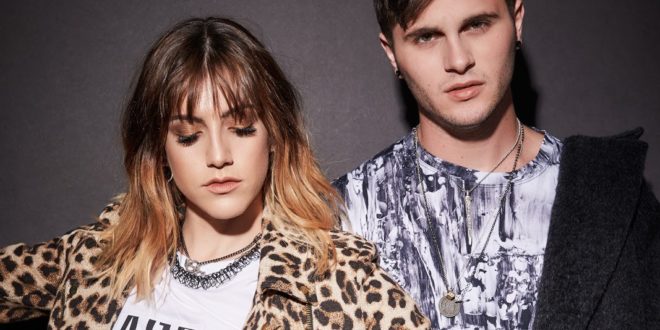 4
SHARES
FacebookTwitter
Indie/pop duo Wayfarers is the product of two members of two different bands coming together. Katie Cecil from KSM and Anthony Purpura from For the Foxes and Stereo Skyline have joined up to put out music that is fun and infectious. Separately they have toured with Demi Lovato and The Summer Set and together have a passion for record stores. I recently got the chance to interview them.
1. You both started out in other bands (KSM & For the Foxes). What did the time in those bands teach you in preparation for this new venture?
Katie: I learned a lot from being in KSM. I learned how to work together as a team of 5 girls (which meant sometimes all sharing one bathroom!!!), and we all had to mature very quickly and act as professionals 24/7 at a very young age. I learned the ins and outs of touring, how to put on a show when people LITERALLY have their backs turned to you, and how to laugh it off when you slip and fall on your ass in front of 15,000 people.
Anthony:  I learned a lot from playing in different bands. Mostly how to work together, and how this music world works.
2.You’ve toured with acts such as Demi Lovato and The Summer Set. What was the touring experience like for each of you?
Katie: Touring was awesome. Our very first tour was an arena tour, which isn’t typical. We had the Disney machine behind us and our situation was really unique. Touring with Demi was a great experience, her fans are awesome!
Anthony: I love touring. Waking up in a new city everyday and seeing different places really makes you look at things differently. It makes you see how big of an impact music really has on everyone.
3.Your music has been featured in ads for Facebook and Verizon? How did that come about?
Music supervisors (the people who choose songs for tv shows, commercials, films, etc.) have contacted us saying they love the songs and want to use them! Of course we are very flattered and it’s a great way for your songs to get exposure. We also are lucky to have a few fans connected with some awesome brands who have passed our music along.
4. “Kings” is a very fun song. How has your sound matured from your debut single “Just Our Style?”
Musically we’ve evolved and have started taking more “risks”. Not being afraid to add in certain sounds that aren’t typical “pop”, like the disco vibe etc.
5.In “Kings” you sing of being “kings of the record store.” What is the first section of the record store you gravitate towards?
“B” is for Beach Boys.
6. What is the last record you bought?
Katie: On vinyl, probably The Civil Wars. But I’ve been listening to Ed Sheeran’s newest album Divide and I’m getting the vinyl version ASAP.
Anthony: The 1975 Music for Cars vinyl
7. What are some records you’re excited for in 2017?
Anthony: I hope Brand New puts out their new album we’ve been waiting years for. I’ve also heard that Haim is putting one out as well.
Katie: New music from John Mayer! I think it’s cool how he’s releasing his album in 4-song segments. It really gives you a chance to appreciate each song so that none go to waste. That’s kind of what we’ve been doing too.
8.Where did the name Wayfarers come from?
A “wayfarer” by definition is a traveler. For the majority of our time together as a band we have been living on opposite coasts meaning lots of traveling back and forth, so we felt it suited our situation. It’s also what we hope to continue to do – traveling with our music.
9. What is up next for Wayfarers?
We’ll be releasing our music video for “KINGS” in the next few weeks! Stay tuned by following us on Instagram (@Wayfarers), Facebook (Facebook.com/wayfarers) & Twitter (@WayfarersRock).
Check Out “Kings” Here: