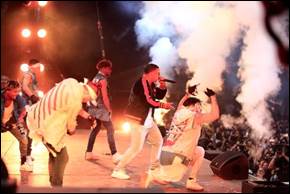 The L Festival has been called the Coachella of Latin music. And although the 2017 edition did not live up to such a high standard, it nevertheless contained more variety than one might imagine.

The most exciting performer on the first day of this two-day festival was clearly Daddy Yankee, the reggaetón performer from Puerto Rico. With his cool glasses, short haircut and hyperactive backing dancers, Daddy Yankee hit the stage with plenty of energy, which was fed back to the performer in equal measure from the crowd, and this unique blend of Latin rhythms and rap-inspired vocals was just what was necessary to make the music go bang.

Even a Latin music could easily and quickly appreciate what Daddy Yankee does. Banda El Recodo, which mixes elements of Banda music and Ranchera into its sound, should have been more of an acquired taste. After all, these groups substitute Sousaphones for the lower end bass in the mix. These groups also include woodwinds and other brass instruments, but no rock & roll electric guitar. This act, which predates the advent of rock & roll with an inception date back to the early 20th century, put on widely entertaining show. Fronted by two singers, who traded back and forth on vocals, these musicians in their matching, monogramed suits danced, played and all obviously appeared to be having a great time. Just the sight of many grandmas at the foot of the stage singing along to every song revealed just how much this music is a part of their lives.

In contrast, Cynthia Silva plays a similar style, with a similar band makeup, but with different results. Although she’s a fine singer, the mixture of her singing and her band’s playing came off harsher and less celebratory. It was almost like punk rock, at least in attitude.

Juanes also impressed with his singer/songwriter sounds toward the end of day one. Much like a kinder, gentler Police, Juanes mixed in sweet reggae elements into his intelligent, heartfelt songs. Luis Fonsi also proved that Latins know how to perform straight pop. Lastly, Columbia’s Beto Vargas sounded a little like Tom Petty during the best moments of his guitar-slinging set. He even threw in an old rock & roll-tinged Chuck Berry tribute on this, the day he died.

Day two promised to be intriguing, as a hologram of the legendary Jenni Rivera was scheduled to appear. But when it turned out to be little more than video montage from the performer, it was a disappointment. J Balvin, with his hip-hop-influenced sounds came off far better. So also, did Los Tigres Del Norte, which had both young and old thrilling to their Norteño sounds. Each member – except for the drummer – played cordless instruments and sang with headset microphones, which allowed them to roam the large stage freely.

Held at the Pico Rivera Sports Arena, which looked like a home for bullfighting and ended up being the perfect venue for this Latin cultural event. This may not have been a Spanish language Coachella, but for many on the festival grounds, this was their Coachella.