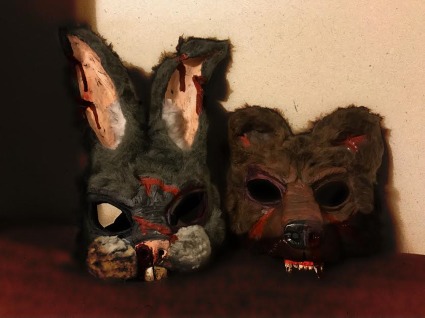 Album Review: The Bunny The Bear – The Way We Rust

For their seventh full-length release, post-hardcore duo The Bunny The Bear, comprised of Matthew Tybor and Joseph Garcia, have kept up their consistent level of output with The Way We Rust. The Bunny The Bear have released an LP every year since their formation in 2010. While this work ethic is admirable, one can’t help but wonder if the quality of their content can remain at a steady level. It’s apparent that many artists, no matter how talented, can showcase a decline in caliber due to pumping out albums at a rapid rate. In The Bunny The Bear’s case, their music seems to have kept a uniform standard, proving that they can remain prominent even with such a hefty output of material.

The opening tracks “Rabbit Hole” and “I Am Free” have an emphasis on distorted vocals and electronic instrumentals that take their time building up before exploding and giving the album an unabashed jolt of energy. Matthew Tybor’s vocals draw comparisons to Bert McCracken from The Used in both his clean and screamed singing ability. Overall, the album’s first impression offers song structures similar to an act like Twenty One Pilots but with a much heavier aesthetic.

After listening to the first few tracks, listeners will understand that The Bunny The Bear have rather ambitious goals for their music. Blending elements of post-hardcore, electronica, synthpop, and various others, The Bunny The Bear don’t feel the need to be tied down to one specific genre. This varied sense of musicianship could be considered both an asset and a hindrance for the band, depending on the context. For example tracks like “Wait And See,” “Caress,” and “Heart With A Hole” all feature fun, dance-oriented electronic instrumentals and clean vocals that reach impressively high pitches. “Wait And See” especially has some impressive vocal performances which make it a true standout on The Way We Rust. The closing track, “Revisiting Romance” has some good, clean production which makes the backing piano and guitar solo stick out to a pleasing degree. The track’s overlapping synths aren’t too strong and they work just well enough to give the song a vibrant tone. “Revisiting Romance” is arguably the most cohesive track on the entire album and it’s quite a strong moment with which to end.

Certain other tracks are catchy and well performed, though they can occasionally be dragged down by the other musical factors that have also been incorporated. The third track, “Andrea,” features some dubstep-esque instrumentals that feel out of place especially compared to the more dance-focused brand of electronic music that’s mainly put on display throughout the rest of the album. It’s an undeniably odd moment on The Way We Rust. Track five, “Love Lies,” again has moments of pleasing vocals towards its beginning though it is quickly relinquished by a mix of post-hardcore vocals and flashy backing instrumentals that might give listeners flashbacks to the bizarre crunkcore genre. The tenth track “Bloody Lip” seems rather ambitious in its production but there is quite a lot going on throughout its runtime and the multitude of layered genres tends to drown out any cohesive sounds.

While the band’s ambition is commendable, it can also muddle their sound due to a lack of overall focus. The main area for improvement directed towards The Bunny The Bear would be to actually narrow their sound down to a specific style. The multi-faceted styles that the band brings to the table are well-intentioned and have obviously garnered them a sizable fanbase, though gravitating towards a specific genre for an entire album might help with the coherence of a full-length project.

Despite the oversaturated use of genres on a handful of tracks, The Way We Rust will likely satisfy listeners who enjoyed the band’s previous LP’s. The Bunny The Bear perform each genre well on every track and prove that they can provide a sound that will garner the attention of a wide demographic. For listeners wanting a style that provides a wide array of different genres such as the ones previously mentioned, then this album will likely be an enjoyable listen. It’s definitely an impressive feat that The Bunny The Bear have produced such a copious output over their still relatively short career thus far, and they have proven to have the talent to keep their stride going for years to come.

Cain Miller is an aspiring writer who hopes to work his way up and gain notoriety for his material. Having written about film, television, music, and sports, Cain is always looking to gain as much experience as he can and continue to improve his writing abilities.
@cainemiller
Previous Riksha Release Video For “Five Stages of Numb”
Next Snovonne announces new album “The Child And The Bitch”!