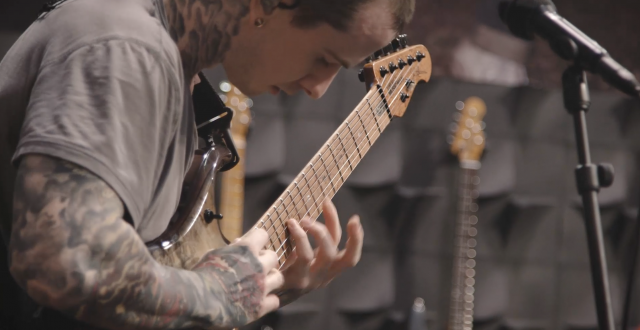 Jason Richardson has contributed his finesse to such prominent metal acts as All Shall Perish, Chelsea Grin and Born of Osiris. Last July, the Virginia-bred guitarist released his debut solo album, I, to massive critical acclaim. That reception was based not only on his sheer ingenuity, but his subtle, yet complementary implementation of textural nuances, as a means of providing each track a largely cinematic depth. When put in perspective, the album is a culmination of proficiency he had fostered up until adulthood.

While currently supporting Polyphia and Covet on the Lit AF tour, Richardson set aside some time to discuss how the development of his musicianship led to that of his solo album. From the album came the eventual collaboration with producer Joey Sturgis. Together, they’d produced a Toneforge VST plugin directly inspired by I’s guitar tones. Ultimately, Richardson hopes that hard rock musicians utilize the plugin to achieve a level of stylistic and experimental freedom.

As a youth, Richardson was surrounded by an environment of varietal string and percussion instruments, gleaning inspiration from watching his father play. This was an experience he simply calls ‘huge.’ “Being around everything allowed me to practice and take interest in music,” says Richardson. “I saw him do it, and that just made me want to do it too.” “That was such a long time ago now,” he laughs. “But it definitely made things a whole lot easier.” After a short span of trying to find his feet musically, the guitar would prove to have the greatest impact on Richardson’s musicianship. “It clicked the best. I was able to progress a lot further than I had with any of the other instruments, so I just stuck with that one. With melodies and stuff that made it more appealing, I was able to put full songs together as opposed to only one part. It really ended up working in my favor, that’s for sure.” In fact, the influence the guitar had on him was such that his educational path took a detour. A month before graduation from high school, he left in pursuit of a full-time music career. “Being on tour, I really didn’t know exactly what I was doing at first,” Richardson admits. “But it’s a lot of fun getting to play shows every single day. There’s all these different ways you can tour now, whether in a van or bus. He then mentions that he is in the back of a van, trying to talk amidst ongoing music, before continuing to comment. “It’s kind of hard to hear (laughs)—but yeah, I’m really glad I’m doing this. After being off for a year and a half doing solo album stuff, it’s sick to be back on the road playing again.”

Coming into his solo album, I, Richardson’s skill set had peaked, to the extent of guitar being only a fraction of its structural makeup. “I do all the programming and electronics for everything too, so there’s far more layers of that versus the few guitar tracks in comparison.” For reference, a single song alone may comprise up to 40 individual programming inputs. A majority pertains to digital instrumentation such as orchestral and textural elements. Nonetheless, each one works collectively in bringing out the less-than handful of guitar layers. During the process, Richardson’s structural foundation had evolved exponentially. “The guitar is cool and all—it’s sick and fun to play, but I’ve come to enjoy the programming element more now,” he says, after having studied Hans Zimmer MasterClass segments while on tour. With the album’s stylistic components unified, its collaborative aesthetic works much the same way. “[Being on the same page] definitely helps. It shouldn’t be something you’d need to think about. Working with people you enjoy should just happen anyway, you know what I mean? If you work with someone who’s a jerk the entire time, it’ll make the process a lot more stressful.” Considering I’s vastness, including various writing and production contributions, all was made possible by two direct band members, Richardson and drummer Luke Holland. One of the album’s highlights is its carrier single, “Hos Down,” a testament to its diversity. Despite the song’s largely tech metal leanings, it contains substantial sections of bluegrass and jazz. “I’d gotten to that point in the song, and had to keep reminding myself that I can do whatever I want,” he recalls. Given this independence, his goal was to attract a diverse listening audience. “I’d always join bands, coming into something that already had a fan base built, and couldn’t alienate those fans over wanting to write just anything. I was like ‘screw it’, and had to get everything out after being with Chelsea Grin for four years, which was heavier and slower. The crazier type stuff is more fun for me, personally.”

Rounding the collaborative and creative aspects of the experience, Richardson’s teaming with Joey Sturgis to create a plugin was surprisingly straightforward. “Joey’s partner Eyal [Levi] hit me up one day and was like, ‘Hey, do you wanna do a plugin with us?’ I said yes, and that’s pretty much it,” he laughs. “I worked with Eyal on a couple of things in the past, like Chelsea Grin’s Evolve EP, and then a single before Ashes to Ashes came out, so I’d already known him for five, six years or so. That way, he’s been doing all this stuff together with [Joey Sturgis Tones]. The plugin’s tone umbrella was conceived by producer Taylor Larson, to whom Richardson gave free rein. Its rhythm tone is based upon three phase-aligned layers: Two are mid and low gain, taken from a Friedman Small Box 50-watt, while the third is from a PRS Archon. The clean setting comes from the combo amp, Tone King, and leads are from a Soldano head. Although Richardson considers the plugin a duplication of I’s tones, he simply aims for artists to use it as a base for their original ideas. Reiterating, he states, “this isn’t just for metal. You have a clean, rhythm, and lead head, and can turn the knobs up and down, so it can be used for pretty much anything.” Like the solo album, the plugin continues to be positively received for its diverse range of styles.

Lastly, Richardson told his fans, “You guys are awesome. I couldn’t have done this without you—thank you!”

I come from a family who is passionate about all things music. I learned to sing at an early age, and by 13, had my very own Fender Strat guitar. I tried my hardest at learning all that I could. Because I was born with cerebral palsy, I had to teach myself an adaptive playing style. I learned to write and record my own music, despite these difficulties. In college, I started making great use of my writing abilities by reviewing music, as well as copy editing. I guess it's best to stick with what you know, while welcoming a fair challenge at the same time.
Previous Gallery: Brain Salt live at The Delancey, NYC 03.17.17
Next Gallery: The Xcerts at Arena in Vienna, Austria 17/3/2017