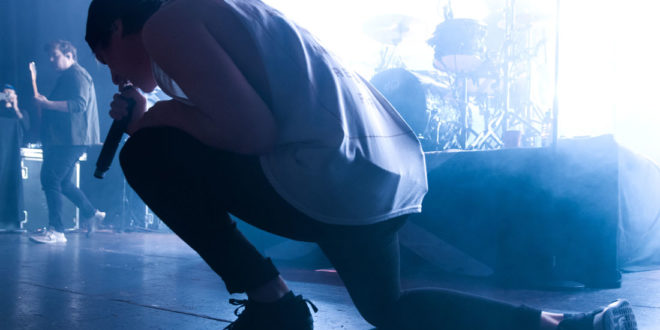 Halfway through their UK leg of the UK/EU tour, along with the boys in Northbound and As It Is, the lads in State Champs have been absolutely smashing it. Europe was a sell out an the UK has been much the same but Glasgow, as always was the place to be!

Kicking off the show in the most incredible way was the lads in Northbound who are for sure the next big thing in the scene and a band who are incredible humble for the opportunities they’ve received. After the release of their amazing album “Death of A Slug” I knew that we were in for a treat with their set. I always stand by my thoughts that you should make an effort to be in for supports. Northbound proved me right. With a high energy and passionate performance. Musically each member of a band obviously brigs something difference but Northbound are a band of different personalities and I think that what makes them so tight knit and amazing when they preform, they bounce off one another’s personalities and energy. “Actor” possibly one of my favourite songs, was one of the best moments of the whole night if you ask me. Every time I watch Northbound preform I just want to watch them do it over and over again because no matter what the song I always have so much fun. Big smiles when they make eye contact with people who are singing the words loud and proud. A sea of lights took over the crowd during their set and it was just stunning to see the whole ABC lit up. Finishing up on “The Effort is Never Worth The Outcome” was possibly the most incredible end to the set and I know it was a good set because I was sad it was over. I wanted it to keep going.

With the appropriate pre-set 50’s music to tie in with the aesthetic of their new album ‘Okay.‘ From the word go, every moment of their set from start to finish was full of excitement and every single member of that band were 110% enjoying themselves. Kicking things off with the title track from the album I could tell from then that there were a lot of fans in the audience. There were so many hands in the air with the aggressive ‘pop-punk finger’ and the band just fed off the excitement and buzz of the crowd. Front man Patty Walters was his usual, excitable, jumpy and excited self. With a stage as big as the ABC it allowed Walters to show of his very impressive mic swings, leaving the crowd in awe. Running though the new songs was an amazing change, to go from seeing them preform songs off their Blenheim Place EP to a room of around 30 people to now playing a a nearly sold out room and absolutely rocking the songs from their second album was insane. Watching these boys tear up the stage is always a pleasure but for me, two songs that especially stood out were Now Way Out and Soap, two songs that are very different from anything we’ve heard from As It Is before, dark, angry and perfect to just loose yourself too.

As always the band highlighted what a pleasure it was to play in Glasgow, calling it their second home when it comes to playing there and it’s true. Glasgow crowds always go hard and the band seemed to realise that when they decide to mention “The Sesh” and every single person in that venue cheered clapped and screamed. Patty even noting “that got a bigger cheer than any of the bands on stage.” Which to be fair… He wasn’t wrong. Now this did come just before their slowed things down, an acoustic guitar being brought on and instantly phone lights were being put in the air, the amazing and emotional performance of “Still Remembering” tugging at everyone’s heartstrings. It was beautiful. Now I couldn’t go through their review without giving a special little mention to the lovely Ben Langford-Biss, who, since these shows have began has been in full on rockstar mode and it’s incredible, not just watching him, but watching the whole band enjoy themselves and to be playing their new material and being so proud of what they’ve worked on but of course, it wouldn’t be an As It Is show without hearing the song that shot them up in the scene. “Dial Tones”. It was insane, being the song that most people knew the crowd went nuts, every member of the band smiling as the realised how incredibly amazing it was to see every person going crazy and of course, to top everything off, a small blonde hair singer launching himself into the crowd made for a perfect end to the set.

“Now for the main event of the evening.” State Champs. Having played the ABC before as a support act, to see them play the huge stage as a headline was beautiful. The back of the stage hung a massive State Champs banner and the whole stage was lit by incredible coloured lights. State Champs have always been a band I admired from the release of The Finer Things so getting to watch them rock out on stage and preform a mix of songs was truly a treat. Much the same as their support, State Champs has nothing but energy on that stage. Lead singer Derek having a very prevalent stage presence and using the whole stage to bust some moves.

Straight into things with Loosing Myself things started off on a fun and exciting note and it didn’t stop. I don’t believe I’ve ever had as much fun as I did during their set. Not one persons feet were left on the ground for the whole of their set, the words were being shouted, the chants being chanted and best of all, every single person was having an amazing time. The was crowd surfer upon crowd surfer coming over the barrier, taking Derek’s hand as he sang, each of them passionately singing with him. Mosh pits opened in the middle of the crowd and if someone went down they got pulled right back up. After speaking to Tyler and Evan before the show we discussed just how incredible their fans are weather it was for dedication to the band or being a down right crazy crowd, they are some of the nicest and most accepting fans in the pop-punk scene. This band aren’t just a band to rock out to do, they’re also a band you can just dance to, loosing yourself (no pun intended) in their amazing sound. “We are going to make this the best Tuesday night of your year.” And true to their word, everyone I’m the crowd felt that, after a hard day of work, uni or school going to a State Champs show just makes you forget about it all. Spending time watch a high energy show with good music and great people is how a show should be and I think this band have mastered the art of keeping their crowd going crazy but for a few songs, like many bands do, the band slowed things down. The rest of the band apart from Tyler and Derek leaving the stage. They started with “Stick Around” from The Finer Things and it was beautiful, it gave everyone a chance to cool down and just enjoy some calm. Since the release of a little project The Acoustic Things, “If I’m Lucky” has been one of those songs that I have on every single ones of my playlists and to hear it done acoustically, live and raw was such a honour but they switched things up by bringing out the full band for the end of the song and it was so overwhelming and I must admit I she’d a little tear.

“Breaking Ground” aka my most favourite State Champs songs came at a late point in the set but I was still hyped, my feet weren’t touching the ground and I could feel the sweat pouring off me. Now of my favourite things in the world is the feeling you get in your chest when the band stop singing and just let the crowd sing. Just imagining what that feeling must feeling like to State champs while they preform is crazy. It is very evident that they are a band whole love doing what they do, they love being on stage and they’re so humble for everything they have. Not once did one of them stop smiling and for me that’s what makes shows even better. Watching the band enjoy what they’re doing because it makes you, as a fan, have an even better time. As we approached the “last song of the set” I was growing a little emotional. It was another moment when I didn’t want it to end. Even through I knew there was still two songs for the encore it’s still simultaneously the best and worst feeling when a show is about to end because you’re so hyped by you want it to last forever. Scotland tradition usually dictates that a when we want a band to come back on we chant “here we fucking go” but not today. No, there was a new chant “Yer da sells avon” which, if you’re not from here will leaved you confused, which is exactly what State Champs where when they returned for their encore. The encore was something special, for people who have known the band a long time were in for a treat when instead of the predicted song on the setlist they played “Critical” a song I was dying to hear live. They had been changing things up every day of tour, playing new song, old songs, songs they’d never played before, all because they listened to their fans.

Now even if you don’t Listen to State Champs, I can 100% assure you that you’ll know their song “Secrets”. It’s on ever pop punk playlist and I myself couldn’t help but throw myself into the pit for the final song, it was sweaty, rough and the best encore I’ve ever witnessed. There were so many crowd surfers being thrown through the crowd, clasping their beers and belting out the words. I’m so very grateful to State Champs for making that a night to remember and for fans out there who are waiting for new music, it looks like you won’t have to wait long because after this tour cycle they’re getting back into the studio to write some brand new tunes.

Tags 14.03.17 around the world and back As It Is Concert Photography glasgow Interview northbound Okay review State Champs

19 Years old from Glasgow Scotland, currently studying Radio at City of Glasgow College in conjunction with my own Youtube Channel!
@johnhughxs
Previous AS LIONS RELEASE MUSIC VIDEO FOR “ONE BY ONE”; DEBUT ALBUM ‘SELFISH AGE’ OUT NOW!
Next Interview with Tyler and Evan from State Champs in Glasgow, 14.03.17