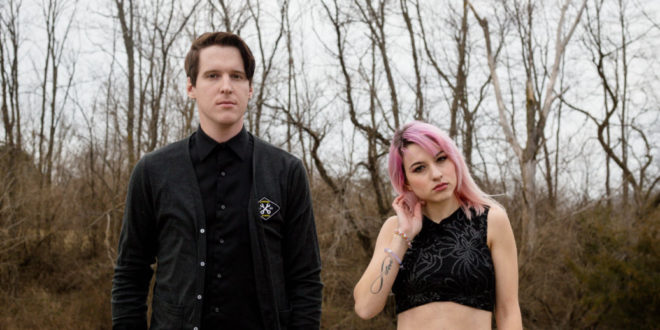 Bringing back memories of the early 2000’s female-fronted pop-rock bands, Ashland is gearing up to release their debut album Wildfire. Available on March 17th, this ten-track record oscillates between powerhouse performances and silky-smooth deliveries.

The Central Illinois duo formed in 2014 when vocalist Asia Woodward met guitarist Aaron Wood through a Craigslist ad. In the fall of that same year, the band entered the studio with producer Matt Amelung (who has won Best Recording Studio by Riverfront Times) to record their debut EP Interim. Since its 2015 spring release, Interim’s leading single “Eyes To the Sky” has been streamed over 20,000 times. Since their inception, Ashland has been a tireless live act, booking DIY tours every chance they get and sharing the stage with names like Breathe Carolina, The Ready Set, and Switchfoot.

The first track on Wildfire, “Lights Out,” is a definite must-listen. Wood’s strong guitar, highlighted by electronic notes, kicks things off, but it’s Woodward’s unique voice that commands my attention. In this anthemic song, she flawlessly switches from confident projections to silky falsetto as she calls for an uprising.

The easy-going “Got Love” is a blissful escape, even if it is saccharine-sweet. The way Wood’s acoustic guitar is layered over its electric counterpart and piano tapping is meditative. Woodward’s vocals take on a happy-go-lucky quality as she sings “If you don’t got love, then you don’t got much” during the chorus.

Woodward’s near-solo opening in “No Trouble” allows her to showcase her vocal talents, right before she truly belts out the chorus in an explosion of sound. Her performance in this song about ditching the drama of a relationship could easily set her in the same league as Icon For Hire’s Ariel.

The same vocal power displayed in “Light’s Out” returns in the plucky “Turn It Up.” Woodward once again commands my attention as she sings lines like “Say what you want, hey! Don’t let ‘em bring you down. Cause it’s your life, you gotta live it out.” Wood’s guitar mimics the lyrics, subtly swelling in volume during the chorus as if to mirror the track’s title.

“Keep Moving” features an irrefutable determination to keep going through life’s hardships. This song showcases some of Wood’s strongest riffs on the album. This track could stand as anthem to those feeling lost, beaten down, and worn out as Woodward sings “Let me fall / Let me breathe / Let me rise above it all / No gravity.”

Wood’s guitar fades in briefly before “Closer” truly kicks off and his riffs become darkly distorted, highlighted by the rapid notes of a music box. In this number, Woodward weaves a fascinating tale of a sultry, heartbroken woman hellbent on revenge. This mesmerizing song is harder than the rest of the album, leaning more towards hard rock.

Wildfire’s first single “No Good” changes Ashland’s sound up again, as the band opts for a funkier vibe. This track features some of Woodward’s silkiest moments on the album as she sings fondly of the feeling of falling in love. Likewise, some of her strongest powerhouse moments can also be found with the lyrical juxtaposition of knowing this person is no good.

Wildfire is full of nostalgia, calling back to the early days of Flyleaf and Paramore. Keep your eyes peeled on Ashland’s social media, as the band plans to accompany the release of their debut album with an incessant amount of touring. In the meantime, you can pre-order Wildfire via Bandcamp, Big Cartel, iTunes, or Amazon. Also be sure to check out the band’s debut EP Interim on Spotify and watch the music video for “No Good” below!

Previous Gallery: Skillet Live At The Marquee Theater In Tempe, AZ 03/12/17
Next Mick Hayes Releases Official Music Video for “Hard 2 Explain”“The lyrical story behind HARD 2 EXPLAIN is actually quite easy to explain for anyone who has been through those circumstances before. Your heart is committed, but you are suspicious nonetheless. “ – Mick Hayes Click HERE to download Mick Hayes music on iTunes