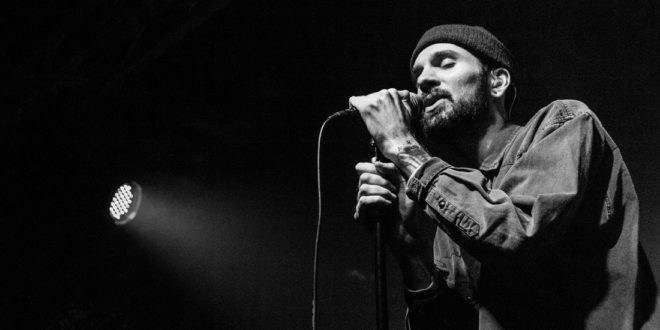 Wallflower are a band who never lack an incredible and wonderful energy to them. Musically they’re so so beautiful and every member in the band just seems to work in an incredible harmony to provide and amazing and rich sound. From their first time in Glasgow with Boston Manor, Wallflower have really progressed musically and the new song showed them going in a heavier direction. It was really really amazing to watch the change from some of the older stuff. It was as if you were watching a child grow up, take it first steps to full on walking in a matter of songs.

The band themselves have a very unique music style that I don’t think I’ve really heard in a lot of the pop punk/grunge scene. Their music is dark, their lyrics emotional and beautiful. Despite some technical issues (not to mention having to move their van to avoid a ticket 2 minutes before they were due on stage) they absolutely smashed it. Lead singer Vini, just put so much passion into his performance as did every member in the band which to me proves how seriously they take their music because even when their equipment packed in, they kept going as best as they could, giving it their all. A special shout out to drummer Charlie, for playing it off so cool when he managed to split a drumstick in half before making a quick and smooth recovery.

From the moment Big Spring stepped on stage they had an energy about them, something lingering that was just waiting to be released and released it was. Jumping straight into things my mind went through a mix of thoughts, that they were like a hybrid of genres, some indie rock meets classic rock or Tenacious D meeting Nirvana. It was such a unique sound and something I’ve never heard before. The music was almost dramatic and the members has such an obvious grip over their instruments because everything worked to make things just sound like they weren’t even trying. It was effortless. With some particularly impressive rhythm guitar. When launching in to their new song “5th of July” it was great to see the difference in the music, as a band I’ve never listen to before, just from that one new song you could really tell that they’ve made a very smooth musical difference. Also I couldn’t not mention the lovely bassist who played the whole show shirtless and was just totally rocking out, not a care in the world. Like I mentioned before, this band made their music look effortless and that’s a sign for me, when a band have mastered being a band.

“Newcastle, how you doing?” Okay, so maybe not the best way to start a set in Glasgow but Decade‘s Alex gave everyone a much needed Monday night laugh before launching into their set. I’ve seen Decade a couple of times before but quite honestly this time felt different, more energetic and wild.

Musically and harmonically Decade did not fail deliver a stand up show, strobe lights flashing and their music just beholding, Alex brings a rich and beautiful tone to their music. A little bit of extra percussion is always a good step when playing live and the addition for the tambourine was perfect. When the band led into some new songs from their new album I could feel myself so lifted by the music and by the message the band delivered. A fun but chilled vibe.

“Human Being” was one of those songs that triggers a little emotion or memory when you hear it. “This is a song about fucking things up and it being okay to fuck things up.” Now that right there, that is what I love about these kind of shows. I love bands that are real, emotive, bands that just act like normal people, admit to their mistakes. For me Decade seem like a really down to earth band and they seem so so chilled out. They get their crowds excited and are so appreciative of it all. A personal favourite of evening was “British Weather”, no matter how well your new music does, it never beats a cheeky older song and this one made the crowd get a lil’ crazy. For people who have seen Decade before, know this: they have an amazing stage presence and also a great relationship with their crowd weather it’s like I mentioned before, that they’re relatable. Speaking about having a shitty weak and just not caring or weather it’s just a good old fashioned clap along, they’ve mastered the art of captivating a crowd. I seriously cannot fault Decade because they’re musically sound and sound as guys as well. Each and everyone of them look like they love what they do and it’s apparent on stage. One member in particular, guitarist Joe caught my eye the whole night, just going absolutely full steam, singing, playing and busting some sweet little guitar moves. If you’re looking for a great and high energy show, Decade are a band I highly suggest.

19 Years old from Glasgow Scotland, currently studying Radio at City of Glasgow College in conjunction with my own Youtube Channel!
@johnhughxs
Previous Gallery: Save Ferris with Baby Baby and Octo Gatos at Revolution Live , Ft. Lauderdale, FL 2.23.2017
Next Gallery: Japandroids at The Ready Room in St. Louis, MO on 3.5.17