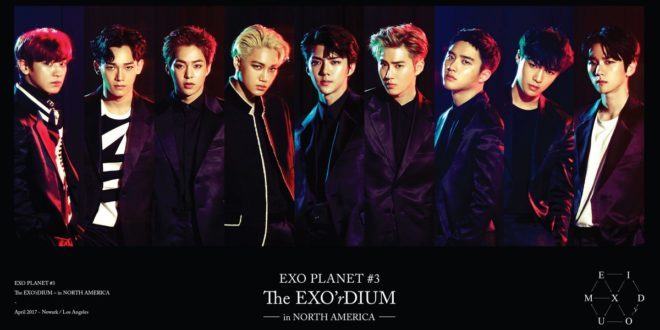 MyMusicTaste announced that EXO, Korea’s most popular boy group, is once again coming to North America for their highly anticipated tour, “EXO PLANET #3 – The EXO’rDIUM – in NORTH AMERICA”. The group will return to the Prudential Center Stage on Tuesday, April 25, 2017. Tickets for the tour will go on-sale Tuesday, March 13, 2017 at 8 P.M. and available to purchase online at www.ticketmaster.com or http://www.prucenter.com/

Having debuted in 2012 under powerhouse S.M.Entertainment, EXO has quickly established their position as one of the most desired and influential K-pop groups in the world. Their first full-length album ‘XOXO’ became the first album in the Korean music industry to sell over one million copies in twelve years. The group shined out their popularity and influence by selling out their first solo concert, “EXO FROM. EXO PLANET #1 – THE LOST PLANET – ”, in just 1.47 seconds. The legendary group has been showing no signs of losing momentum in their popularity ever since. Since their debut, including the record of winning “Grand Prize” on various music awards for 4 consecutive years, they have won over 100 awards. Their second studio album, “EXODUS”, also sold over one million copies and shattered the record on U.S. Billboard 200 as the highest ranking Korean male artists; and their third studio album, “EX-ACT”, was released last year and became a triple million seller.

Following the success of the first tour, North American fans once again decided to bring another EXO tour to fruition through MyMusicTaste, an online service that brings together music fans to request their favorite artist’s concert. MyMusicTaste, DREAM MAKER, and S.M.Entertainment will once again make fans’ dreams come true.

Further information will be available through www.mymusictaste.com and via our social media channels and partner websites.