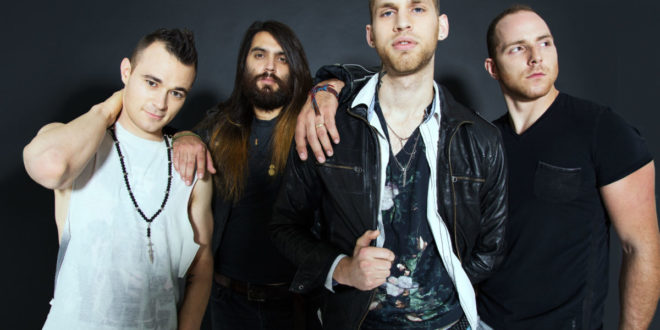 The high-energy, Nashville-based pop-rock quartet HOTSTOP are ready to hit the road this spring to support their debut EP Elevated.  Already wowing crowds with their Led Zeppelin to Michael Jackson influenced original songs, the Southern/Mid-West tour will start on February 25th in Louisville, KY before making its way around the southeast and mid-west.  The band will also take part in the River & Spires Festival on April 22nd in Johnson City, TN joining Drowning Pool, Montgomery Gentry and more.

Formed in January 2013, HOTSTOP is Bryn William (vocals), Drü Marshall (drums), and the Wlodyka brothers (guitars), Waldemar and Derek Max.   The Wlodyka brothers were born and raised in the heart of Los Angeles. The youngest of the brothers, Derek, has a street performer background and has been actively wowing audiences since the age of 11, while Waldemar has a classically trained background.  Bryn and Drü moved to Los Angeles in the summer of 2012, from Ohio and Florida respectively, meeting through serendipitous circumstances that included chow mein and the Star of David. If that kind of eclectic cultural mix intrigues your mind, then the rock stylings of HOTSTOP will definitely jumpstart your soul.

Eventually, the quartet relocated to their ‘new’ hometown of Nashville. Making the decision to do so was certainly influenced by the music they were writing.  Songs “Superficial” and “Hipster Chick” indicate why the band recently left the jaded environment for their new creative hotspot. “Those songs do touch on why we left,” Marshall reveals. “Los Angeles is just full of hipsters and that’s one of the reasons we moved out. We’re not into that too cool, not enthusiastic kind of scene. Go to a show in Los Angeles and people are just there standing still. People are desperate to be famous in LA. We would like to do well but we’re about earning it with our music. Nashville suits our band.”

Previous PIERCE THE VEIL Announce The Loudwire Presents ‘We Will Detonate! Tour’ With Sum 41
Next Pot of Gold Music Festival 2017 – Lineup Announced