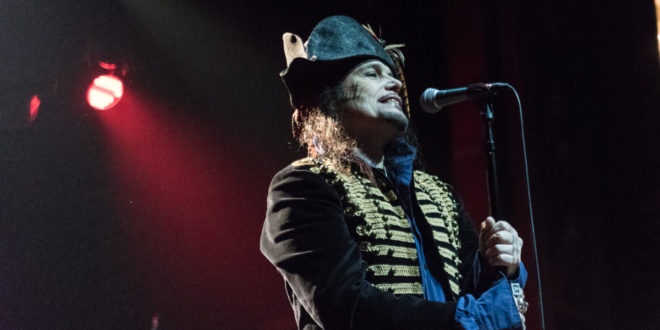 Adam Ant made a delightful return to New York City last Wednesday, February 22nd as the final stop on the Kings of the Wild Frontier Tour. Despite the rescheduled date (as a result of the unfortunate passing of guitarist Tom Edwards the previous month), fans flocked to Webster Hall for an unforgettable night of celebration. Released in the UK in November of 1980, Kings of the Wild Frontier is Ant’s most iconic album, and to hear it played in its entirety was, for many fans, a once in a lifetime opportunity.

At 62, Ant commanded the stage as deftly and effortlessly as he had in his youth. And though there were some younger fans in the audience, a good portion crowding Webster Hall’s grand ballroom belonged to a generation that had grown up with the presence of Ant’s own brand of flamboyant and weird splashed across MTV’s airwaves. Yet the euphoric reaction to the nearly-two hour performance was very much the same. From the start of the show with “Dog Eat Dog” and “Antmusic” through the the album’s final track “The Human Beings,” Ant held the audience captivated every step of the way. Additional highlights were some fan-favorites peppered through with beloved B-sides like “Beat My Guest,” “Vive le Rock,” “Goody Two Shoes,”  and “Prince Charming.” Flanked by double drummers Jola and Andy Woodart, who set the hypnotizing Burundi beats, Ant led the charge in full swashbuckler regalia. But theatrics weren’t everything, because despite his sometimes turbulent past spanning the last 3 decades, Adam Ant sounded positively phenomenal. There was a fire behind his voice that was, perhaps, a bit unexpected but truly a delightful surprise.

While this show concluded Adam Ant’s North American tour run, the band will return to the UK in May. Visit the official website for more info.