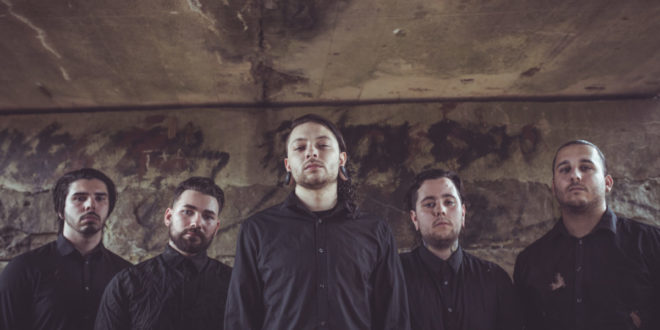 New Jersey metal quartet Lorna Shore have returned with their sophomore LP Flesh Coffin. Lorna Shore are known for their unique combination of multiple metal genres ranging from death metal to metalcore. While in their own right paying tribute to these many metal genres, Lorna Shore have created their own distinct style that feels fresh in its presentation.

Flesh Coffin begins with “Offering of Fire”, a fantastic piece of organized chaos. There is a good progression early on in the track and it ultimately builds up to Tom Barber’s impressive vocal chops. Barber’s ability to transition between gutter growls and higher pitched screams is reminiscent of Travis Ryan from Cattle Decapitation. Austin Archey’s pounding percussion gives the track a foreboding tone that could draw comparisons to 2014’s The Satanist by Behemoth, which many will claim as one of the best metal albums of that year. The thunderous instrumentals paired with Barber’s hard-hitting vocals will immediately catch the ears of metal fans. Track two, “Denounce the Light,” has instrumentals that are closer to power metal thanks to Adam De Micco and Connor Deffley though the vocals here are closer to the likes of grindcore. One might think that this track would be too clustered and grimy given the unorthodox warping of genres, but the clear production and dedicated performances make for a cohesive listen.

The fourth track “Desolate Veil” draws more inspiration from black metal due to its somber sound compared to the previous tracks. The haunting intro is a much more mysterious approach than what the album has presented thus far and the darker lyrics make it one of Flesh Coffin’s eeriest moments. The black metal aesthetic continues on tracks like “Infernum” and “Black Hollow” though there is a prominent incorporation of other metal styles as well. “Infernum” mixes in the aforementioned grindcore elements and “Black Hollow” does a fine job of including metalcore into its black metal foundation. This all builds up to the final track, “Flesh Coffin” which takes a more traditional black metal stance. The vocal transitions of Barber are once again impressive and the chanting done in between the instrumentals gives the track an unearthly presence. It’s an unsettling, spine tingling-piece of heavy metal that will leave a lasting impression on listeners.

The varying influences on this project show an evolving sound for the band when compared to their 2015 release, Psalms. While that album is a quality piece of heavy metal, it’s a fairly straightforward metalcore/deathgrind project. It’s a brutal listen that will please fans of the harsher styles of metal, though Flesh Coffin undeniably offers a broader assortment of genres. Lorna Shore aren’t afraid to take their time with Flesh Coffin and focus on slower, creepier moments. It’s an admirable transition in style for the band since they are clearly looking to broaden their sound and evolve a musicians.

The strongest characteristics of Flesh Coffin revolve around how Lorna Shore are capable of combining their various metal influences into different forms. While this makes most of the album a fascinating discovery, there are certain moments where the band seems to come up short. Tracks like “The Astral Wake of Time” and “FVNERAL MOON” are well performed metalcore songs but they remain fairly straightforward with their presentation. These tracks don’t include the various elements of death metal, black metal, or power metal that were prominent on the rest of the album and that ultimately makes them more forgettable. Songs like these are still pleasing to listen to but they don’t pack the same layered punch like any of the other previously mentioned tracks.

Flesh Coffin is a solid project that pays homage to various genres of metal. The band seamlessly transitions from abrasive sounds to evocative experiences in an organized fashion. For listeners who enjoy many different facets of metal, Flesh Coffin is definitely worth checking out. The blending of different styles is itself enough to hook in listeners, and the skilled musicianship and song crafting are what will make everyone stay for the full ride.

Cain Miller is an aspiring writer who hopes to work his way up and gain notoriety for his material. Having written about film, television, music, and sports, Cain is always looking to gain as much experience as he can and continue to improve his writing abilities.
@cainemiller
Previous Single review: Nothin Right (feat. DAYVID) – Wolvo
Next Gallery: Suicide Silence Live At Joe’s Grotto In Phoenix, AZ 02/23/17