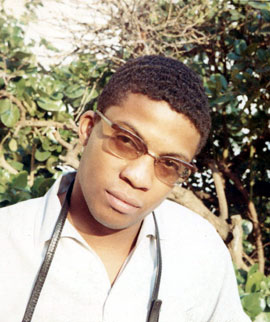 Although this show was billed as Herbie Hancock, Wayne Shorter, and Terrence Blanchard, many left the concert hall wondering, ‘Where was Wayne?’ Shorter, a saxophonist who also made his early mark playing with Miles Davis back during the heady early jazz fusion days, sat down the for the whole performance and didn’t really play that much. Granted, pianist Hancock also played minimally and trumpeter Blanchard even less, but Shorter (no pun intended) took significantly shorter and fewer solos.

It should be noted this was not strictly a jazz concert. These popular jazz greats were backed by the Los Angeles Philharmonic under the direction of James Gaffingan, and the night’s four-song set was weighted toward orchestral performances. The Philharmonic played admirably too, performing complicated, extended jazz compositions, almost as though these were symphonies. Opening with “Herbie Hancock: By Himself,” which is Blanchard’s reinterpretation of Hancock’s “Dolphin Dance,” and closing with another Hancock piece, “Maiden Voyage,” this was one evening that displayed the deep compositional skills of these exemplary players. It was, however, not a forum for their hefty jazz chops. There were likely many who walked away into the rainy disappointed.

The poorly named Brooklyn ensemble, Snarky Puppy, opened the concert with a five-song, more hum-able set of beat-driven instrumentals. Led by the obviously thrilled-to-be-there electric bassist, Michael League, this talented outfit smartly utilized its short time on stage by showing off a few of this dog’s best tricks. They began with the slightly dirge-y “Kite” opener, but fully took fire with the Brazilian groove of “Semente.” They saved the best for last, though, by performing the funky “What About Me?”, which was highlighted by a thrilling musical interchange/duet between League and drummer Lanrnell Lewis. Ah, if only the headliners had played with such fire.