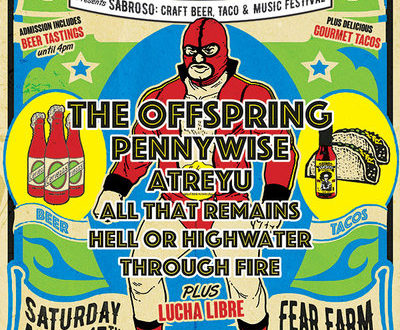 BRUFEST presents Sabroso will host over 160 craft beer options from 40 breweries and features a music lineup headlined by multi-platinum rock band The Offspring, along with performances from Pennywise, Atreyu, All That Remains, Hell or Highwater, and Through Fire.

Dexter Holland of The Offspring says, “We love tacos, Pennywise AND beer, so this is gonna be a great day for us!”

BRUFEST presents Sabroso co-producer Cameron Collins of Brew Ha Ha Productions says, “We are excited to have Sabroso Craft Beer & Taco Festival expand into Arizona this year by partnering with KUPD and the legendary UFest to create BRUFEST. Sabroso has been a fan favorite in Southern California the past few years and I know it’s going to do great in Arizona! The craft beer community is growing like crazy in Arizona and there is some incredible beer coming out of the state.”

98KUPD Program Director / Middays DJ Larry McFeelie says, “KUPD is thrilled to be working with SGE, Brew Ha Ha Productions and The Offspring this year for UFest. We’ve been working on combining a beer fest with UFest for some time, and this was the perfect marriage! UFest 2017 (BRUFEST) will be one of the biggest parties of the year!”

In addition to live music, gourmet tacos and craft beer offerings, BRUFEST presents Sabroso attendees will be entertained by lucha libre style wrestlers, and are invited to sample all flavors of Gringo Bandito—Dexter Holland of The Offspring‘s top rated hot sauce—during the event.

BRUFEST presents Sabroso runs from 1:00 PM to 10:00 PM on Saturday, April 15, with VIP and Early Entry beginning at Noon. Those with VIP tickets will enjoy an extra hour of complimentary exclusive tastings in the VIP lounge. Guests under 21 may enter at 4:30 PM.

Tickets for 98KUPD’s BRUFEST presents Sabroso: Craft Beer, Taco & Music Festival go on sale Friday, February 24 at 10:00 AM MT. A limited number of discounted presale tickets will be available for KUPD “UCREW” members on Thursday, February 23 at 10:00 AM MT at 98kupd.com.

General Admission and VIP tickets will be available for purchase for the following prices at brufest.com. All tickets include complimentary beer tasting and access to view the music stage.

Festival General Admission Tickets start at $49, Early Entry Tickets are $65, and VIP Lounge tickets, which include a VIP front-of-the-stage viewing area, are $125. General admission tickets provide up to 30 3-ounce craft beer tastes and VIP tickets include up to 35 craft beer tastes.

Parking will be available for $10 per car and a ride share dropoff and pickup area will be located near the festival entrance.

Fear Farm Festival Grounds is located at 2209 N. 99th Ave. in Phoenix, AZ and is easily accessible by car from the Southwest region and by plane via Phoenix International Airport.

Sponsors for BRUFEST presents Sabroso include KUPD, Hensley Beverage Co, Jack In The Box, Gringo Bandito, and Rockstar Energy Drink, with more to be announced.