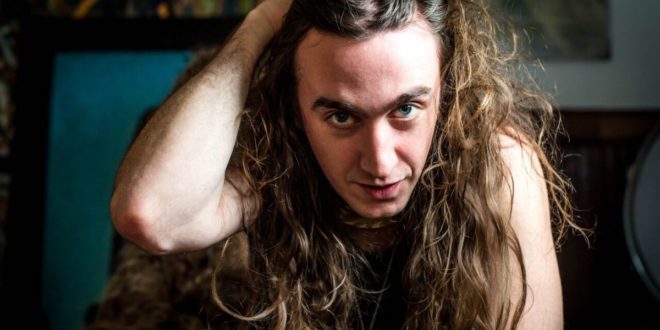 9
SHARES
FacebookTwitter
George Morris, who was the lead singer in the band The Satin Peaches, is branching out on his on with his self titled solo record. His music has been compared to David Bowie and The Beatles and is one of the most talked about artists in Detroit. I recently got a chance to ask Morris some questions about his music, performing at Lollapalooza, and his upbringing.
1. You were the frontman of the band The Satin Peaches. What is the biggest difference between being in a band and going solo for you?
There’s more freedom I guess.  With that comes more pressure.  Playing live though, it’s pretty much the same.  It’s still a band.  You have the same highs and lows.
2. How has Detroit influenced your music, if it has at all?
I don’t know to be honest.  I suppose it has, but I haven’t really lived anywhere else so it’s hard to say.
3. You preformed at Lollapalooza in the past. What was that experience like for you?
It was mostly debauchery.  We weren’t on tour at the time so we stayed the whole festival.  I don’t think I’d survive it now, but it was fun.
4. What was it like in your household when you were young, being raised by musical parents?
Well there was always gear set up so that was nice.  Always a place to practice.  Always music playing too.
5. Your new self titled album is not your first solo record. How does this LP measure up or differ from your  previous releases?
This is the first record the band appears on.  It’s also the first one to have someone else produce it (Zach Shipps).  For those reasons I think it sounds a bit different.  I want every record to sound a bit different though.
6. The Beatles seem to be one of your inspirations that translates into your music. What is it about The Beatles that personally speaks to you as a musician?
I just really love the songwriting.  It made me want to write music.  It’s also amazing how many songs they wrote in such a short period of time.  And they’re all good.
7. “100 Years” deals with a sad theme of growing old and seeing friends pass away. Yet you have said it’s also about “embracing the positive.” Where does your positive outlook stem from?
I don’t know.  I think it’s more, might as well be positive because negativity doesn’t really get you anywhere.  Having said that, I’m plenty negative as well.
8. The first line of “100 Years” is the title of a children’s book by Avery Monsen. What is the book about and how did it inspire you?
I really just saw the title and thought, that’s a good line.  The book itself is really nice too though.  It’s pretty funny.
9. What can fans expect from this new album?
I think it’s different but I think it still sounds like me.
10. What do you hope your fans will take away from this album?
Whatever they want to take away.  I just hope they enjoy it.
Purchase the album Here:
https://georgemorris.bandcamp.com/album/george-morris-lp