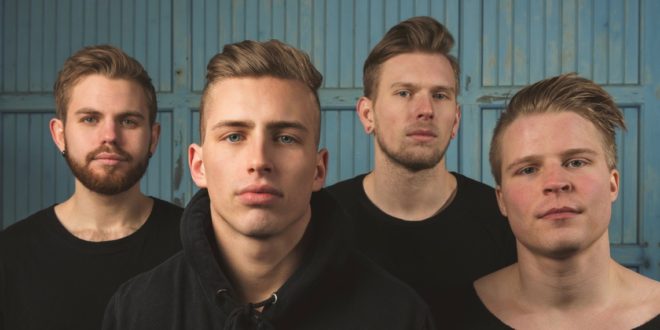 Progressive metalcore quartet Aerial has released their new music video titled, “Foreign Coast” off their 2016 EP Foresight. After spending six months in the U.K. writing and recording., the band reached out to Keaton Goldwire, of Invent, Animate and Jesse Cash of Erra to produce the five track EP. Mixed and mastered by Brian Hood (Memphis May Fire, Erra), the group came away with their debut EP which reached over 250,000 streams in a short couple months.

“We’ve put a lot of work into this EP, and being an independent band makes everything so much more expensive and time consuming,” says vocalist, Markus Johnsen. “Getting all this positive feedback means everything!”

“Foresight” is available to purchase on iTunes and all other online music retailers. Watch “Foreign Coast” below.

A E R I A L is a dedicated, 4-piece metalcore band from Southern Norway that formed in early 2015. Having grown up with one another, the final line-up formed out of a several local bands, shifting through different styles and genres. From the early rock influenced styles to pursuing hardcore, post-hardcore and eventually progressive-metalcore. The band consists a group of close friends thereof, Markus H. Johnsen (vocals), Mathias Corneliussen (drums), Josef Fredén (bass) and Sebastian Madsen (guitar).

In the middle of 2015 the band released their first single ʻRealizationsʼ recorded with GHOSTSHIP Recordings in Budapest. With all the opportunities at hand, the band decided to leave everything behind in Norway to head down to Budapest to write and record their full EP. Together with their producer the journey continued overseas to the United Kingdom where the band lived for 6 months. While living in the UK the band kept on writing and recorded their first EP called ʻForesightʼ that was released June 2016. The EP was early added to Spotifyʼs official metalcore list and has now reached over 250,000 listens on various platforms.

As the band formed early 2015 the band has mostly been playing local shows in Norway, but also at one of their countries largest festivals, Skjærgårds Music Festival. As mentioned above, the band has been playing together in different bands earlier, where theyʻve been playing together all across Norway. After a long time of writing, recording, and live pre-production, the band is now ready to play as much concerts as possible and dedicates all their time and efforts towards pursuing the band’s career. On tour theyʼll be driving their own van all over UK and Europe and will bring a full tour rig.