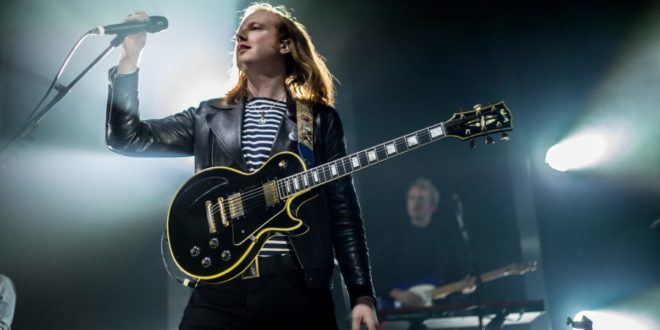 Taking to the stage, Two Door Cinema Club’s setup consisted of 7 LED screens and mind-blowing lighting arrangements. Many photographers have dreamed of shooting these sorts of shows, with no lack of light or an abundance of shadows. The crowd became immediately more aggressive, with many arms and hands reaching out to the members of the crowd in front, desperately trying to reach the stage in front. Their crowd pleasing music had many members of the audience on each other’s shoulders, clapping and shouting along to the music. Their show was both impeccable in sound and visuals, with their lighting flooding the whole room, not just their stage. This meant that members right at the back of the 2000 capacity room felt that they were just as involved as those on the barrier at the front of the stage. Front-man Alex Trimble expressed his love for the city, whilst guitarist Sam Halliday provided enough energy in his performance than the rest of the band put together.

It was evident that the band enjoyed touring and pleasing their fans, ending on an energetic 2 song encore. People who had not heard their new album had certainly became fans by the end of the night, with distant hums of guitar riffs heard in the hallways and bathrooms of the venue as people left.