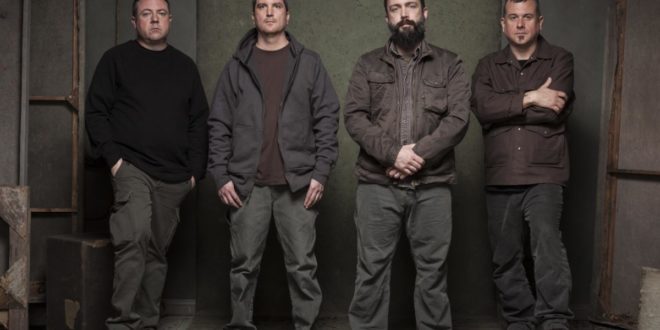 Clutch has just announced a string of headline tour dates for May.  Supporting the tour will be Lucero and The Sword.  The band is also pleased to announce their first annual Earth Rocker Festival at Shiley Acres in Inwood, WV on May 20th.  Full line-up to be announced soon.  Pre-sale tickets will start at 10am ET today, public stale starts 10am ET on Friday.

“We did a whole bunch of touring in 2016” states the band’s front man Neil Fallon.  “Right now, we’re cooling our heels and starting to kick around some riffs for the next record.  We hope to be recording the LP come the end of the year.  Where and with whom is yet TBD.  At the moment though, we’re really just at the beginning phase of writing and we already have a surplus of ideas.”

“In other news, this Spring we will be hosting the first annual Earth Rocker Festival.  It’ll take place in Shiley Acres, West Virginia.  We played at Shiley Acres last year and it was a real blast. Our intent is to have a really diverse bill.   If all goes as planned,  Earth Rocker Festival will continue as an annual event, hopefully growing in scope over the years.”

Previous BLONDIE AND GARBAGE TO CO-HEADLINE RAGE AND RAPTURE TOUR THIS SUMMER
Next Album Review: PJKTS