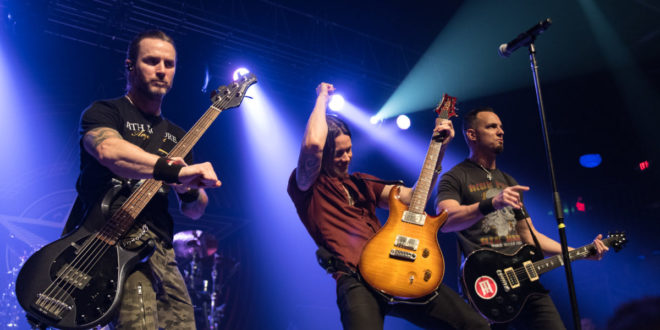 Fresh off a successful arena tour through Europe, Alter Bridge have finally returned home to tour across North America in support of their latest album, The Last Hero.

Performing to a packed house in Philadelphia’s own Electric Factory, Alter Bridge set the tone strong out of the gates with “The Writing on the Wall.” The nearly two-hour performance was a pretty even balance of songs across the band’s 13 year career, with special emphasis on fan favorites “Blackbird” and “Metalingus.” Just past the midway point, frontman Myles Kennedy addressed the crowd on his own, with just an acoustic guitar for company. “Watch Over You” required some assistance from the crowd, as Kennedy had been fighting a cold. Not that you’d be able to tell, because despite being sick, he remains one of rock’s most phenomenal vocalists. Flanked by guitarist Mark Tremonti, bassist Brian Marshall and drummer Scott Phillips, Kennedy acted as crowd conductor for several songs so that his throat could recoup, but in all honesty, it wasn’t excessive. It was more of an intimate experience so that everyone’s voices could be heard. While Alter Bridge isn’t a band keen on theatrics, their charisma and obvious enjoyment more than makes up for whatever over-the-top showmanship one might expect from today’s biggest rock acts. Alter Bridge knows how to have a good time, and make sure that fans do not go home disappointed.

If you have the chance, be sure to catch them on The Last Hero tour. Hell, no gig is the same – make it out to more than one date. That’s what I’ll be doing.

In the meantime, check out some of my shots from their performance at Philadelphia’s Electric Factory: