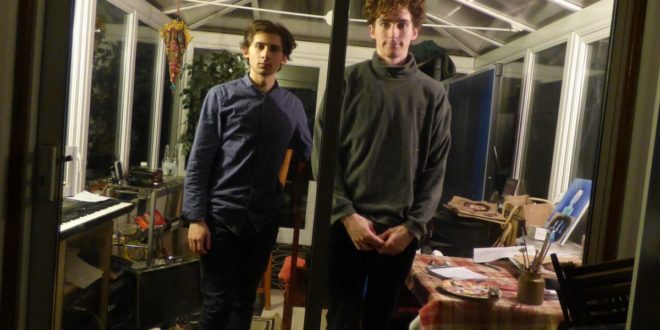 Febueder Signal Their Return with ‘Chimes’

On February 8th, alternative pop three-piece, Febueder, will return with the entrancing ‘Chimes’. The track, and stunning short which accompanies it, are the first taste of a forthcoming EP due spring 2017.

Febueder, whose name is a made-up appellation (pronounced like Bermuda), was formed in 2010 by lead vocalist/multi-instrumentalist Kieran Godfrey and percussionist Samuel Keysell. Their first two EPs Soap Carv and Lilac Lane earned praise from NME, The Line of Best Fit, and CLASH, and had them earmarked as one the UK’s most exciting new acts by DIY.

Following the departure of their bassist in 2015, Febueder returned to their point of origin, a makeshift recording conservatory in Godfrey‘s home in Ascot, England. The shift brought with it a renewed focus on the band’s foundational elements, and a new bassist, Toby Ingram. The place that nurtured their unique alternative pop sound once again provided the band with inspiration and time to explore it.

‘Chimes’ displays the maturation in sound and clarity of vision that came from this period of considered solitude. From Kieran’s pointed vocals to the steady, pulsing instrumentation, the track pushes forth, conscious of the cyclical nature of experience and assured in its intent to relinquish tradition. It’s a dance of hopelessness – whatever you say or do, it will chime back to you.