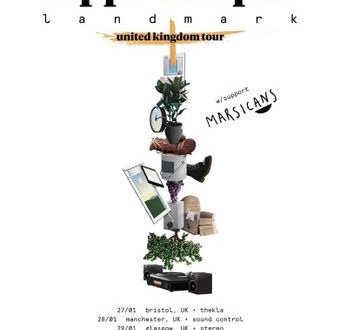 Tucked away in an old Glasgow road, energetic 4 piece Marsicans took the stage last Sunday as part of Hippo Campus’ UK tour. This just prior to the release of their first full length album, Landmark, scheduled to drop 24 February.

Stereo cafe/bar was the perfect place for Marsicans dirty indie sound and show-off harmonies. The band’s energetic synth and flowing guitar drove us into the evening, and it was clear to see that the boys were having fun. Having released The Absence EP in September and adding their next single “Friend” to the setlist, they were bound to set the tone for the night with quirky performance, obvious onstage chemistry, and a string of fairy lights that I manage to find in every room I see them play.

Minnesota headliner Hippo Campus got Glasgow dancing and despite little publicity in the UK, were clearly a fan favourite. Their mellow rock vibe filled the room with teasers of the upcoming album and formerly released track “Suicide Saturday” from their six track 2015 EP, Bashful Creatures.
Their smooth transition between recorded and live music fits perfectly with their surroundings; from an indie, “dancing in your bedroom” perspective to something more rough around the edges. For someone that may not have had the chance to listen to Hippo Campus before the night, the crowd certainly did not let them down, singing every word straight back and convincing the rest that they had been missing out all along.

You can preorder Landmark, and grab tickets for the remainder of the tour here.

20 year old internet person and attempted music journalist based in Edinburgh, Scotland. Contact: rhiannonramsay97@gmail.com
@rhiramsay
Previous Show Review: Starset Live At Pub Rock In Scottsdale AZ, 02/02/17
Next Regretting The Past: Kid Rock – Devil Without A Cause