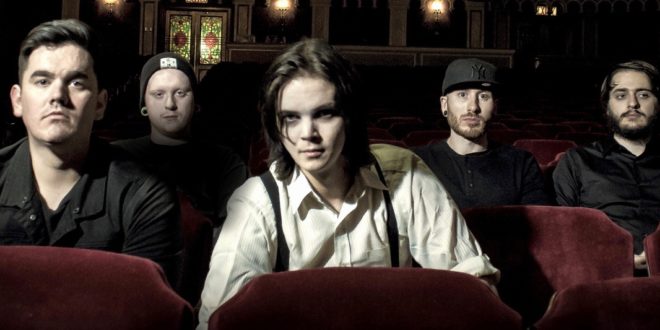 Horror-infused screamo band One Last Shot from Syracuse, NY has debuted the new music video for their single “Leather & Fangs”. The video starts with a nostalgic introduction from Steven Smith of FUSE‘s Steven’s Untitled Rock Show and then showcases a performance from the band at the haunted Landmark Theater in NY. The video was shot by B-horror director Ron Bonk (She Kills, Night of the Strange), with the track’s production being handled by Justin Spaulding and Steve Sopchak (Such Gold, Ice Nine Kills). The single comes from the band’s upcoming album  The Death of a Poet & All of His Friends , which will be released independently on 3/31.

“The album is a concept album about 5 strangers running from an ambiguous dark force,” says vocalist Jeremy Miller. “They find refuge in an isolated chapel in the woods at night that they block themselves in from the evil that surrounds them. The album is about their character development & realization of inevitable death. This song in particular is about the main character, ‘The Poet,’ and his struggles with life and death in the situation he’s been dealt.”

The “Poet” character is loosely based off Miller’s own struggles with life and death. At age 17, he was diagnosed with an autoimmune disease that has no cure and requires daily medication in order for him to stay alive.

“Leather & Fangs” is available for free download at Bandcamp and The Death of a Poet & All of His Friends will be available on March 31st at all online retailers.

About One Last Shot:

“Horror-influenced hardcore-punk quintet One Last Shot propel their band in a manner befitting their name, setting aside both anxiety and frustration to grasp every opportunity presented to them without fear—as if it’s their last.” -Alternative Press

One Last Shot started in 2008 out of anxiety and frustration with all of the problems in the world. Since then, the group has released four EPs, one full-length, and a 7″ single. They’ve played countless shows in a number of states, from basements to bars, to bigger clubs and even appearing at the Vans Warped Tour in 2014, 2015, & 2016. They’ve also shared the same stage with bands they’d normally pay to see, such as Aiden, Ashestoangels, Beartooth, Marmozets, Silverstein, Neck Deep, State Champs, and vocalist Jeremy Romance has even sung live with The Misfits and The Used.

They are preparing to release their highly anticipated new full length album, ‘The Death of a Poet & All of His Friends’, on March 31st, 2017. 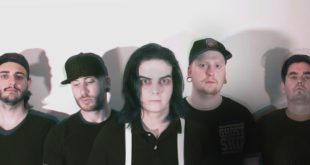