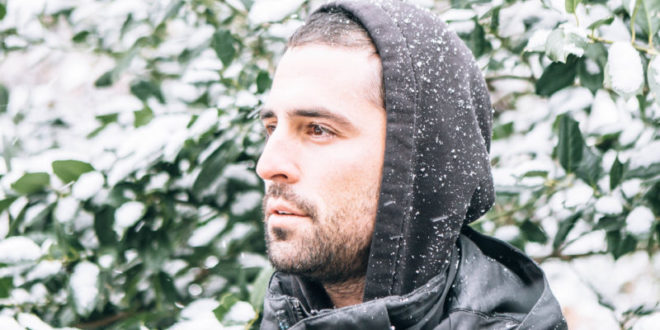 Music Existence had the lovely opportunity to sit down and chat with Adam about the inspiration of his new EP, Green, growing up listening to Fleetwood Mac around the house, and why music is important more now than ever before.

Check it out below!

ME: What got you into music?

Adam: I was eight when my mother played Michael Jackson, Fleetwood Mac, and Eric Clapton and that was playing around the home. So unconsciously, I was always surrounded by music. And then my older brother, who was three years older, got into Blink-182 and music of that genre. And at that time I would follow my brother in whatever he did or listened to. Then, I became obsessed with Blink-182 and music in general at the age of 9 consciously knowing. That triggered me to be a musician. I went through many phases of liking different music even film scores a bit. In high school, I didn’t know how to read music very well, but I made my rhapsody which was a six minute piece with all sorts of different styles and the band teacher agreed to help me write it out. It took a year to figure it all out. Some students stayed during lunch hours to get it right and keep working on it. I remember the performance of it was terrible, but I remember the twenty second part of the strings just being absolutely amazing. I was doing pieces like that while doing my own songwriting and music with my band. When it came time for college, I applied to six colleges and got into one which was Berklee College of Music in Boston, MA. It’s a great school and I feel fortunate to have studied there and learned so much.

ME: What If comes out February 10th. How are you feeling about releasing new music, especially since your singles have received lots of positive feedback and reached many people?

Adam: I’m so excited especially since it’s different to the songs I’ve released. We have a cool campaign coming that we did with Spotify which is “New Music Friday” and some other playlists. Then, that Monday we play on The Bachelor and Wednesday we have something with Spotify. Then on Friday we play the Today Show. It’s all just really exciting; pouring out my heart into my music and seeing people’s response is so exciting.

ME: Can you talk about the process of creating it and where you were in life while creating the EP?

Adam: That’s a really good question. Well, “Lemonade” is on it and I worked on that with Mike Posner. We started that song two years ago. The other songs, for the most part, in my mind mentally I fell in love for the first time about a year and half ago. Throughout our relationship, there were lot of things trying to pull us apart. It was hard to let someone go who you love and care for, but I knew it was for the best. When you really love someone, you sometimes have to learn to let go of them. In that process I learned I have so much to gain in life than to lose. Because in those times, it’s easy to be sad and sappy about it. I had something beautiful and great in my life, but I had to let it go. I had to learn to transform that into some positive and fruitful rather than negative. A Lot of this EP stems from that vibe. During the making of the EP, I was traveling a bit. I was on the road with Posner and later got a spot at a house in Malibu, CA and that was nice because I could clear my mind and embed myself into my music. The EP definitely has West Coasts vibe and I absolutely love California.

ME: Would you say California is your rock, the place you’d always return to?

Adam: Oh, for sure. I do want to live in New York for a little while. I love New York City, there’s so much diversity and everything is fast-paced and I feel like I get more work done. I grew up in Scottsdale, AZ, which is the suburbs. It was nice growing up there but there’s not much going on culturally or musically. Whereas, New York City is the total opposite. It’s like kale smoothie. It gives you this kick and it’s good for you, but you can’t have too much of it unless if you have diarrhea. That’s when you have IN-N-Out, my only exception of greasy foods. If IN-N-Out were to come to the east coast it would break the media.

ME: Earlier you walked us through the process of the EP and the lesson you learned of letting someone go even though you loved them but know it’s for the best. Is that the message you want people to receive?

Adam: There is more to be gained then there is to lose.

ME: What is your favorite lyric that you have written?

ME: When and where do you tend to get most inspiration from? Triggers that make you create?

Adam: Everything inspires. I had this professor at Berklee, Pratt Bennett, and one of his major lessons was about connecting the dots. We would read these books and he would be really hard on us on what a certain word meant and what it was used in that context. And what that meant a chapter later when it’s mentioned again and connecting the meaning behind those decisions. He taught me how to find the connection in everything in my life. You have to be vigilant to connect quirky occurrences in life. I draw inspiration from connecting all of these. I drive inspiration from connecting facets of my life whether it’s love, loss, a math equation. There’s always something to draw out of in life. I don’t find one subject or facet in life to be more influential than another. I think too much and the pro to that is that I’m able to connect, think, [and] recollect my thoughts to connect those dots in life. Someone asked Charlie Chaplin, “How do you get your ideas?” He said, “Ideas are like a lighthouse.” You have to constantly be aware and looking.

ME: Given current events in the news and the world, do you believe forms of art like music are now more important than ever?

Adam: Music gives you a whole different way of seeing or interpreting something like in a mindset. A group of white men should not be making decisions on what a woman can and can’t do with her body. That’s just logical. I think in a hundred years, it’s one of [those] things we’ll look back on and then [wonder] how did some people think that’s not logical. But 46% of people who voted for him have grown up being taught certain things so it’s the only logical they know. I think at the end of the day it’s not about personal opinion it’s just logical. How do you present an idea to someone who has never been taught or seen something different beyond what they know. A song could teach me how to phrase something different and it can make me feel an emotion that impacts me deep down. Art can open our minds and hearts.

Adam: I come back on February 16th for the Today Show. Then back to LA, working on some things. And right now, we are trying to lock in a tour.

photo based human in nyc and phoenix. sneaking in my camera everywhere I go.
@https://twitter.com/ginabgarcia
Previous Interview with Matt Snell from Invidia
Next Gallery: Eric Krasno at Gramercy Theatre, NYC, 1/28/2017