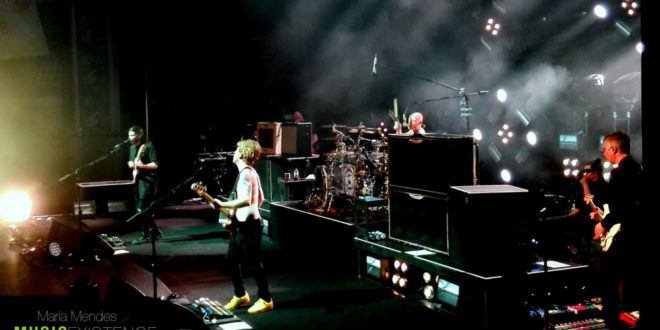 In a very emphatic and visibly enthusiastic way, a chatty Frank Carter grabbed the audience from the beginning and we could see a small mosh pit taking place from the very first song. A few fans gearing up with Carters band shirts kept the interaction and held Carter as he sang while literally walking on the audience.

You could hardly tell it was an opening band as fans kept cheering with each song. Carter revealed himself as a great frontman, and you could notice how happy he was with the love he was getting back from the audience.

As a result, the crowd was very warmed up when Biffy Clyro hit the stage with their first song “Wolves of Winter” from the new album Ellipsis.

A large audience went along with the band since minute one, either singing or shouting the popular chant between the band fans “Mon the Biff”.

The setlist consisted mostly of Ellipsis tracks mixed in with older hits. Along with the opening song we could listen to “Howl,” “Friends and Enemies,” “Rearrange,” “Herex,” “Medicine,” “Flammable” and “Animal Style” at the encore. We were able to listen almost every song from the new album, which was widely well received, if the crowd’s enthusiastic singing was anything to judge by.

Frontman Simon Neil has a particular and amusing way of swaying while he sings you could watch him smile a lot throughout the performance, visibly satisfied with the energy he was getting from the show. You could also watch a very enthusiastic James Johnson on the bass and backing vocals as well as Ben Johnson on drums notoriously enjoying their time on stage.

Neil took the energy down a notch as he returned to the stage for a 3-song encore, performing an acoustic rendition of “Machines” followed by “Animal Style” and “Stingin’ Belle.”  And while the band promised to return to Portugal very soon after a 2 hour onslaught of a phenomenal rock show, fans didn’t want the night to end. Myself included.