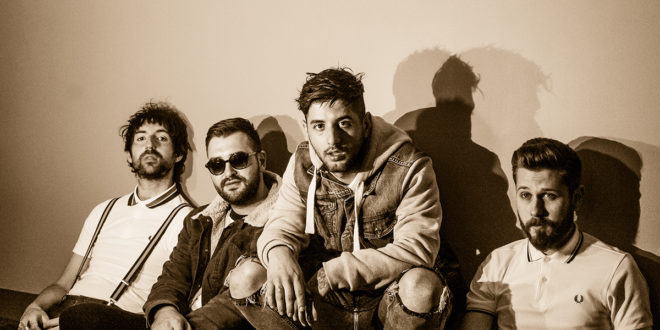 The band share their newest single, ‘Top Boy’ from their forthcoming EP, You Pull It, set to release via Marshmallow Pavement Records on February 17th, 2017. Following the release of their debut EP and a successful European/UK tour in 2014, the boys head out on an east coast Australian tour during February and March in support of the new EP. The tour kicks off at The Karova Club in Ballarat on Friday Feb 24 with label-mates The Montreals, and Melbourne Garage- Rock darlings BATZ. They’ll make their way up the coast on a 9-date tour, hitting Melbourne, Canberra, Sydney, Brisbane and other cities along the way.

There’s nothing pale about these Adelaide lads and best mates; vocalist Michael Pietrafesa, guitarist David Zammit, Jose Moucho on bass and Johnny Zervas on drums. Considered ‘Australia’s answer to Kasabian’ THE BYZANTINES have incorporated a varied mesh of sounds and layers, all the while feeling organic and staying true to the British sound that bands like The Stone Roses and Primal Scream made famous.

After polishing off The Delta Riggs’ rider and copping abuse for it from them manager whilst supporting them at their Rolling Stone Magazine Live Lodge event, guitarist and talented engineer and producer Alex Markwell was impressed and a friendship was born. Markwell offered to help produce and engineer the EP so in 2015 the boys decided to hit the recording studio.

Recorded between competing national tours and other commitments, The Byzantines also enlisted the help of friends Dan Crannitch (Love and Other Crimes) to assist with pre-production and Luke Godson (Luke Million/The Swiss) to help capture the more electronic aspects of the band’s sound.

The initial session birthed ‘Jamaica’, ‘a swaggering hot mess’ (Rolling Stone Magazine), which set the benchmark for the rest of the EP. The first listens from the new recordings are ‘Jamaica’ and ‘She Moves’, available on triple j unearthed, both singles lauded from critics and fans alike.

Tags Music Video The Byzantines top boy You Pull It