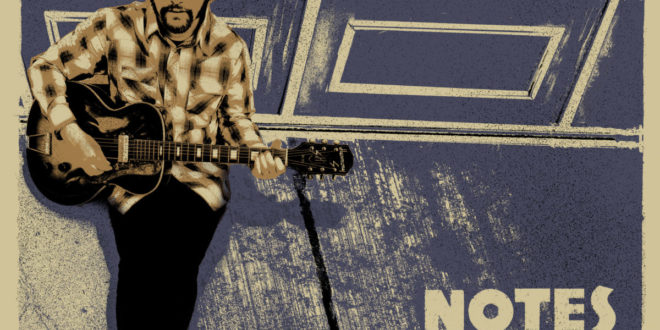 Nashville, TN – Seminal band Son Volt has announced the February 17 release of their new album, Notes Of Blue (Thirty Tigers). Led by the songwriting and vocals of Jay Farrar, Son Volt was one of the most instrumental and influential bands in launching the alt.country movement of the 1990’s. A movement that was the precursor to what is now widely referred to as Americana.

The 10 songs on Notes Of Blue are inspired by the spirit of the blues, but not the standard blues as most know it. The unique and haunting tunings of Mississippi Fred McDowell, Skip James and Nick Drake were all points of exploration for Farrar for the new collection. The album opens with the country soul of “Promise The World”, followed by “Back Against The Wall”, a song that could stand alongside the great Son Volt songs of their early albums. However, Notes Of Blue reflects the blues as it resides in the folk tradition, but heavily amplified. The primal stomp of “Cherokee St.”, the frenetic guitar on “Static” and the raw slide in “Sinking Down” exude grit and attitude. Conversely, tracks such as “The Storm” and “Cairo and Southern” seamlessly meld blues with hypnotic melodies that add a unique balance to Notes Of Blue.

Farrar possesses one of the most distinctive voices in roots, rock, country or any genre. He exudes a soulful longing combined with a wise-beyond-his-years command that is as arresting and compelling as ever. As a songwriter, Farrar’s depth and poetic penchant has been the foundation of a thoughtful, deep and intelligent body of work. Both attributes are on full display on Notes Of Blue, as he touches on themes of redemption and the common struggle, both of which are at the core of the blues.

Whether you call it alt.country, Americana, roots rock, insurgent country or just good ol’ rock ‘n’ roll, musical trends appear and disappear on regular basis.Notes Of Blue is a testament to the legacy of inspiration and creative spirit that Jay Farrar and Son Volt continue to uphold.