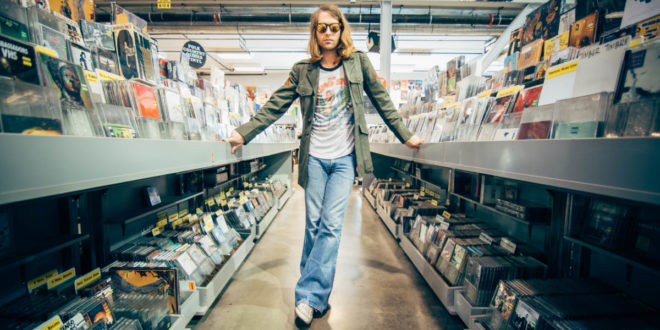 Back in the 1970’s a Canadian rock band named Klaatu emerged onto the music scene and very quickly rumors led to the band actually being The Beatles under another name. The rumor wasn’t true but Justin Levinson who just put out a retro inspired album Yes Man has definitely taken the sound of those two famous bands, deliberate or not, to create an LP that is sure to please listeners who want to take a musical journey back in time.

The title track “Yes Man” is a midtempo tune with excellent guitar work which follows the life of a man who “knows not how to say no to anyone.” We follow this man to work and then to his dreary home life, and it’s a universal theme that goes beyond just one man. In its very simply structured lyrics, plainly following the yes man around, it carries an air of Paul McCartney’s “Another Day” or his more recent song “On My Way To Work.” The staccato rhythm of the tune matches the monotonous content of the song perfectly and Levinson’s voice while fresh and upbeat is able to showcase the façade the yes man puts on every day who “nods his head and smiles.” Many people will be able to connect with the sad but truthful song, not sugar coating life, and mans struggle to just get through a day while trying to break free from the daily chains that hold him back. Though the tune is very upbeat the juxtaposition of the actual lyrics gives the song an interesting flavor that will get listeners talking.

One of Levinson’s best qualities is his ability to be sweet and sincere, making even the most clichéd and simple lyrics a pleasure to listen to, very similar to what McCartney has been able to accomplish in his career. “I’ll Move Closer” is a throwback ballad that is lush and sweeping and full of pure niceties. Some might say it is too simple but Levinson makes it work. “I’ll move closer when it seems you are far from me,” Levinson sings with a heart made entirely of gold. The song has a 60s/70’s instrumentation going for it, especially in the long and twangy guitar, but at the center, the ballad is a piano driven song which suits the tune so well. Even with lyrics like “there is no me if there is no you,” Levinson, while not spouting the most clever words, doesn’t need them because he is speaking from the soul. Sometimes just plainly singing from the depths of ones heart is more than enough. Not only is it a great track but it’s one of the highlights on the album.

“The Moment I Laid Eyes on You,” starts off with a dark almost classical piano movement, that sets up the melancholy state the center figure of the song feels before he meets the love of his life. “There was a time when the darkness took over my mind/lost and afraid what a mess I had made of my life,” Levinson sings before the instrumentation rises, crashing into a wonderful moment that mimics when the protagonist of the tale sees the sun. The lyric that most stands out is “the wrong turns and missteps were all meant so I’d be led here.” It’s a line that anyone who has fell in love after coming out of a stormy period of their life will be able to connect to. Still retaining the retro sound, coming across as something Klaatu could have written and released themselves, it displays Levinson’s talent s for telling timeless tales . But his ability in 2017 to draw such an accurate depiction of 60s/70s music makes Levinson’s music that much more likable.

There really isn’t a bad track on the entire album. The sound is consistent and the LP flows well from one song to another. If you’re a fan of the type of tunes from yesteryear check out Yes Man.