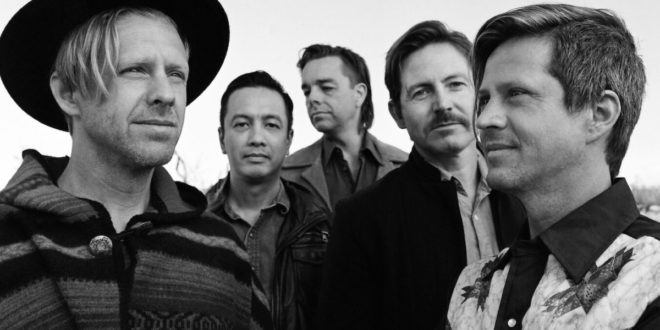 Switchfoot’s leader Jon Foreman has been looking for America on its current tour, which recently landed in Anaheim. What he’s most likely seen during this trek is a divided country. Divided politically (of course), economically, racially and religiously. The band’s charismatic singer/songwriter attempted to be a one-man national unifying agent– no easy task. Nevertheless, Foreman played cheerleader, getting the crowd to wave hands from side-to-side at differing points, and song leader — which took little prompting — easily inducing the audience to sing along. He announced at one point that his hope doesn’t come from Washington, D.C., but from the healer of souls. He is, after all, a devout Christian.

Switchfoot performed arguably its biggest hit (“Meant to Live”) early, and drew liberally from all phases of its career. Highlights included “Twenty-Four,” which Foreman sang on acoustic guitar, and especially set-closer, “Where I Belong.” The latter observes the temporal nature of Earthly life, “This skin and bones is a rental,” its lyric reminds us, for a performance that concluded with a slew of confetti raining down on the audience. The song’s words only bolstered Foreman’s belief that his only answer for our current national troubles is the healer of souls.

The band encored with “Float,” which was augmented visually by a disco ball that temporarily transformed this Anaheim venue into an approximation of Studio 54. They followed this up with “Live it Well,” which featured some its key words on a screen behind the band. Foreman ventured into the audience to sing “Dare You to Move,” which included a lot of hand shaking and fist bumping, before sending the crowd into the cool night air.

America may be going through scary times, but it helps to have bands like Switchfoot pointing to heaven, which is where true healing begins.