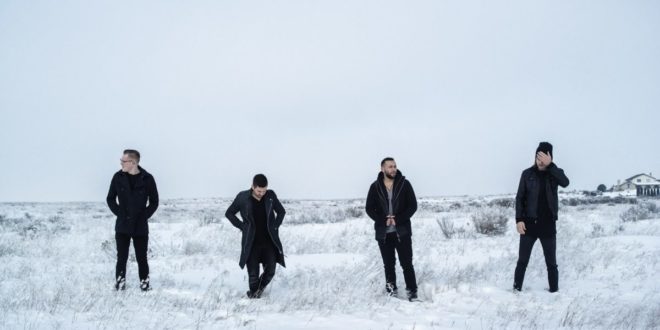 Praised for their dynamic songwriting, pop-driven lyrics and multi-layered rock instrumentation, alternative pop/rock band Night Argent have been making waves since the debut of their self-titled EP in Spring 2016. Since then, the band has been busy in the studio gearing up for a follow-up EP release (to be announced soon), working diligently behind the scenes to the anticipation of fans everywhere. A band who credits the inspiration behind their sound to their energetic live performance, today Night Argent released a live video of the band performing their rendition of Swedish pop artist Elliphant’s infectious song “Revolusion,” from their hometown show at The Scarlet Room. The video shows off the thrilling stage production and lighting the band is known for, as well as the high-energy performance the band exudes right up until the very end. This is what frontman Chase Manhattan had to say about the video:

“As an independent band fresh off of supporting our debut EP, when we’re on the road grinding away playing show after show for people who most likely haven’t heard our music before, we live and die by the faces we see light up when we take the stage, and we truly appreciate every fan we make. So when we get to play for a crowd full of people who know our songs by heart and are there to see us, we cherish every single moment. On our most recent tour we decided that if at any point we got the opportunity to encore for our fans, we wanted to close out the show with a song we love playing, by an artist that is truly unique, “Revolusion” by Elliphant. At the tail end our most recent tour, while playing The Scarlet Room, we got that opportunity..”  – Chase Manhattan

NIGHT ARGENT is an alternative pop/rock band hailing from Washington State. Their music combines flawless musicality and infectious pop melodies with the high-energy live performance of an anthemic rock powerhouse. Chase Manhattan (lead vocals, guitar), Shane Santanna (keys, guitar, drums), Evan Taylor (bass), and Zac Burrell (drums) are four multi-instrumentalists who give Night Argent their dynamic, breakthrough sound. In 2015 Night Argent won the Ernie Ball Battle of the Bands landing them a stint on the  Vans Warped Tour and a writing/recording deal with John Feldmann (Blink 182, Panic! At The Disco, 5 Seconds of Summer). The band shortly after penned a management deal with Outerloop Group and released their debut self-titled EP in April 2016, debuting the EP in partnership with FUSE. This dynamic do-it-yourself band has focused the majority of their time in their hometown studio and performance venue on Argent Road (The Scarlet Room at Rainmaker Studios) creating music that not only bridges the gap between artist and fan, but provides them the musical freedom on stage to give audiences an experience they’ll never forget. Off the stage, Night Argent is best known for their brilliant creativity, as shown in their cinematic self-produced music videos for tracks such as “Nothing More Beautiful,” “Widowmaker,” and their take on a holiday classic, “Cold (Carol of the Bells).” Night Argent has played at festivals such as Warped Tour (2015, 2016), SXSW (2015, 2016) and Gentlemen of the Road (2016), and shared the stage with bands such as Imagine Dragons, Andy Grammar, X Ambassadors, and more. Night Argent is set to release their sophomore EP, which was produced by the band and co-written by John Feldmann in Spring 2017. Details to be announced soon.

Previous Album Review: Of the Sun – Before a Human Path (Out April 14)
Next Gallery: The Pretty Reckless at the O2 Ritz Manchester 24.01.2017