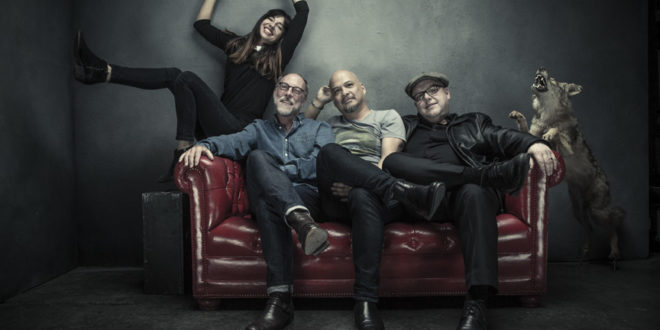 Pixies, one of the most influential alt/rock bands of all time, will take their signature aural mix of psychedelia, dissonance, surf-rock and loud-quiet-loud on a five-week tour across North America in 2017, the first of a three-leg trek across the continent.  Following stops in Japan, Australia, New Zealand, and the band’s first-ever South African concerts, the North American tour will launch at the Fox Theatre in Pomona, CA on Friday, April 21, and will see the band playing theatres and open-air venues.  There will be several special ticket pre-sales prior to the general on-sale which will begin this Friday, January 27 at 10AM local time.  Log on to www.pixiesmusic.com for all pre-sale and general onsale purchasing details.

Public Access TV* and Cymbals Eat Guitars** will split the support slot over the course of the tour.

For these 2017 dates, Pixies – Joey Santiago/guitar, Black Francis/guitar & vocals, David Lovering/drums and bassist Paz Lenchantin – will introduce to its North American audiences a brand new stage set designed by their longtime production manager Simon Foster and lighting designer Myles Mangino.  The design is simple and sleek and fashioned around special pods that house all of the lighting, positioned behind the band.  Fans can expect a set list comprised of the classics and catalogue rarities as well as newer songs from Indie Cindy and the band’s latest release, Head Carrier.  As is the norm, there will be no firm setlist for Pixies’ shows; their sets, while pulled from nearly 90 songs that the band has rehearsed and is prepared to play, will change somewhat from night to night with every number determined just before it’s performed.

Pixies kicked off the European leg of their 2016-17 global run last November, playing sold-out shows throughout the UK and wrapping up in Birmingham on December 8.  Confirmed dates for the 2017 North American trek are as follows: