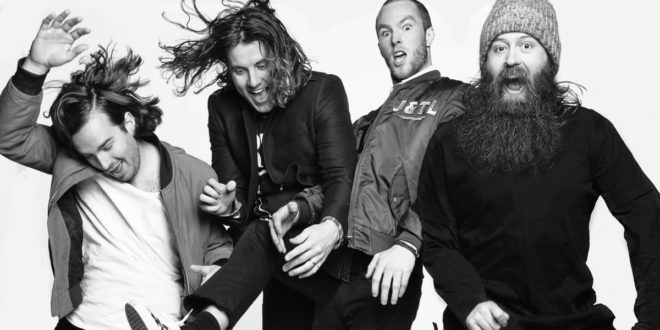 Judah & the Lion are thrilled to announce a run of nationwide headlining dates dubbed the Going To Mars Tour this Spring to support their sophomore album Folk Hop N Roll and rising single “Take It All Back,” which currently sits at #2 on the Alternative Radio charts after a three week stint in the #1 slot. This week they kicked off a huge tour as support on Twenty One Pilots’ EMØTIØNAL RØADSHØW” World Tour. After wrapping up the arena tour, they’ll kick off the Going To Mars tour on March 18th, hitting the Southeast and Midwest before wrapping up a couple of weeks later when the band joins up with Kaleo for a handful of shows on the West Coast. Additionally, the band has been announced for several major festivals, including Bottlerock and Governor’s Ball.

See below for all confirmed dates and click here for tickets!

The band, who performed “Take It All Back” on CONAN last Thursday, January 12th, celebrated the announcement of additional tour dates by dropping a brand new music video for the track earlier last week. Click here or the image above to check it out!

“It’s a weird feeling for us,” says Judah Akers, lead singer and principal songwriter for Judah and the Lion, describing his experience of seeing one of his songs grace a Billboard chart. “Take It All Back,” the folk-rock foursome’s rollicking single, currently sits at No.1 on Billboard’s Alternative Songs chart, and has peaked at No. 10 at Hot Rock Songs following its release last summer. Cooked up in a shed off Music Row, the unlikely smash hit — all mandolin, banjo, driving percussion and raging chorus — has catapulted the band toward the mainstream.