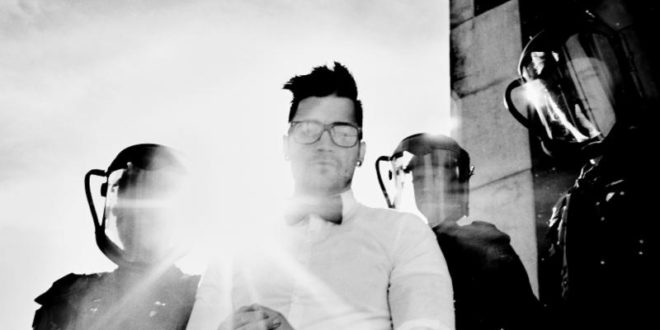 What started for me as a mesmerizing live show in late 2014, has become a truly fascinating journey. Since the release of their 2014 Razor & Tie debut, Transmissions, Starset has seen incredible success in a short amount of time and amassed a dedicated following with each demonstration. Always appearing in flight suits while teasing the audience with their cryptic messages, Starset has been weaving a multi-layered story that reaches well beyond a conventional concept album.

While Vessels is the band’s sophomore offering on Razor & Tie, it could easily be considered a third installment in Starset’s saga. Though it is not crucial to read The Prox Transmissions in order to enjoy Vessels, the short novel definitely opens up a greater appreciation for the material presented in the upcoming 15-track album.

The year is 2013 and The Starset Society has intercepted a mysterious transmission from the year 2047. Earth has successfully established a space colony, Prox, but our technological advances have become incredibly dangerous, if not outright catastrophic. Vessels finds frontman Dustin Bates as the deus-ex-machina in the midst of an unraveling society, where corporations have monopolized cutting edge technology, and with it are controlling the population. Sound familiar? Starset’s delivery can appear incredibly sci-fi, but its themes are intrinsically relevant.

Produced by Rob Graves, Vessels showcases Starset’s ability to bend genres into an all-encompassing sound that’s difficult to describe. At heart, it’s very much a rock album, melodic and driving with an electronic and progressive slant, with an atmospheric composition that almost begs to be on a movie score. Vessels is decidedly more aggressive, but also more refined than its predecessor. Bates’ delivery is phenomenal across a scale of gorgeous melodies, chilling rises and surprisingly powerful unclean vocals.

Admittedly, I’ve had Vessels on a semi-permanent loop for the past week, and with each listen, my appreciation grows. Of the three singles released ahead of the January 20th drop date, “Ricochet” is the most electronic of the bunch. I’d almost venture to say it’s got shades of EDM in its overall production, and distortion on Bates’ voice. And while distortion is definitely present throughout much of the album, I don’t feel like it detracts from the overall quality of the work.

Among the standout tracks “Frequency” is incredibly catchy and an early example of how vicious Starset can sound. The use of unclean vocals is peppered here and there throughout the album, giving certain tracks an added sense of aggression and urgency.

“Die For You” is a larger than life rock anthem that’s quickly become one of my favorites. “Last to Fall” has a misleading soft start that builds into a powerful, catchy chorus featuring some unclean vocals. It’s through-and-through a song that begs to be heard live.

The final track, “Everglow” starts off as a quiet ballad flirting with a pop/R&B influence, but where it really shines for me is its rising climax starting at minute 3:40 all the way through its cinematic conclusion. It’s a track meant to be experienced loud. In fact, I need to hear this track in a film score. It is the kind of finale that leaves you winded and entirely satisfied.

Clocking in just over the 70 minute mark, Vessels is an outstanding exploration of sound. The album incorporates an array of different styles and influences that, though you would think shouldn’t go together, not only fit but work in a way that I’ve never heard before. Starset does all this without losing their identity as a band for the slightest second. And that’s what I find most remarkable.

Pick up Vessels on iTunes today.

Check out Starset’s official music video for “Monster” below and be sure to catch the band on tour this winter (dates below)!