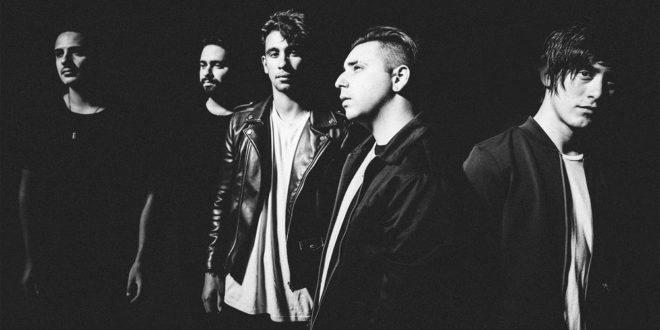 Electronic hardcore band Palisades are back after two years with their long-awaited and incredibly emotive self-titled album. Available now via Rise Records, the band delivers an intense sound that pulls no punches over the course of 11 tracks.

Formed in 2011, the six-piece group from Iselin, New Jersey is made up of Louis Miceli (vocals), Xavier Adames (lead guitar), Matthew Marshall (rhythm guitar), Christian “Graves” Muchozuki (studio DJ/producer), Brandon Elgar (bass guitar/backing vocals), and Aaron Rosa (drums). Shortly following their formation, Palisades signed with Rise Records and released their debut EP I’m Not Dying Today in February 2012. The EP made the Rock Top 10 on iTunes and preceded the release of the debut full-length album Outsiders in May 2013, and sophomore record Mind Games in January 2015. Over the years, Palisades has shared the stage with Hands Like Houses, Crown The Empire, Famous Last Words, and The Color Morale.

“Aggression” kicks things off with an R&B feel before exploding into heavy guitar riffs at the 43-second mark. The heavy EDM bass placed at random intervals throughout the song lends weight to the exasperation in the lyrics. Just as aggressive as the title would suggest, the bitterness in the melody emphasizes lines like “Can we survive what we’ve become?”

Quieting things down for the most part, “Cold Heart (Warm Blood)” questions an unhealthy relationship. As Miceli screams out the line “Is the love strong enough, strong enough?” for the simple chorus, the band’s energy bursts forth, giving me some strong Bring Me The Horizon vibes.

The opening to “Better Chemicals” is wonderful, with background vocals and melodies that interlace together in a psychedelic way. I get a sense of anxiety in the quickly-delivered lyrics and a need for Miceli to prove his own worth.

The faster pace in “Fall” is a little awkward at first, but it quickly smooths out at the initial verse. At first listen, the lyrics do feel a bit rushed in places to me. But this is one of those tracks that grows on you. Each time I listened to this song, the pace felt more natural as Palisades seeks romantic confirmation from a “ten-night stand.”

The title “Let Down” really says a lot about the theme of this track, but the final line of the first verse really nails it down: “I’m so good for you, but you’re so bad for me.” This number perfectly captures that moment of realizing that you’ve done so much for a significant other only to be taken advantage of. I find a certain calmness mirrored by the melody that comes from having such an epiphany. By contrast, the way the band explodes as Miceli screams out his frustration serves as the musical translation of a volatile and final argument.

The loneliness in “Dark” is difficult to describe. Palisades takes what depression feels like and translates it flawlessly through emotive melodies and lyrics like “Better find a place to hide before the sun goes down and it’s cold inside.” But “Dark” doesn’t just stop at introspection. There’s also a need to connect, to be heard, and for someone somewhere to empathize with those feelings.

“Memories” bears a strong theme of bitter dissolution and feels like the closing of a chapter. The guitars between the verses and during the chorus power the strong melodies, but they back off to reveal the ethereal background music as the lyrics turn to painful retrospection.

Turning into the homestretch, “Hard Feelings” brings back the driving rhythms and high energy that has fueled this album so far. That energy falls away almost completely, drawing my attention to poignant lyrics like “And seeing bright red when it’s shaking my core / Can fuck up your head and fill it with thorns.”

The melody served up by Graves in “Personal” lends a slightly more positive vibe to the track, but the personal attacks in lines like “You’re so vain that it hurts” contradict that positivity. In a way, this both is and isn’t a unique track on the album. The juxtaposition between the music and the lyrics during the verses is interesting and unexpected. However, the heavy riffs during the simple chorus are not unlike that of “Cold Heart (Warm Blood)” or “Let Down.”

From explosive start to intriguing end, Palisades has delivered thrashing experience and an overall strong album. Head over to the band’s MerchNow page or iTunes to grab a copy of the album, check them out on Spotify, take a look at upcoming tour dates here, and watch the music video for “Fall” below!